I love to eat and I love to eat out. (Someone else cooking AND cleaning up? Yes, please!) But most of all, if I’m truly excited about something interesting or different, I love to spread the word so that others will know about it.

Chartreuse Kitchen and Cocktails, a restaurant in Downtown Detroit, (very close to the Detroit Institute of Arts) needs to be known.

If you haven’t heard, Detroit is on its way back. (That’s right, b**ches!) While some who haven’t visited Detroit in awhile might think of it as a stripped and abandoned city, they would be surprised to find it rising from the ashes (quite literally) as a beacon of entrepreneurship, culture and hope.

The first time I went to Chartreuse was in February. It had been on my list for awhile, but there are so many good restaurants in our area, it’s hard to get them all in. I was thrilled when my girlfriend suggested Chartreuse for a Saturday night out, and even happier when I got to sit across from her husband who (no joke) looks and sounds like “Sonny Carinthos” from General Hospital.

There were 6 of us dining that night and the only thing better than our good time was the amazing food, the impeccable service and the comfortable atmosphere. There are restaurants in Detroit that I only get to once a year, restaurants that I love, but I have now been to Chartreuse twice inside of a month!

I’m not a “foodie” so I can’t get into ingredients or whether something is gluten free or vegan (wrong blog), I can just tell you what’s good. And Chartreuse is good.

Twice Cooked Egg: I thought this dish sounded kind of gross which is probably why I didn’t push for it the first time we went, but then I saw several positive reviews about it online so we ordered it the second time around. It didn’t disappoint. It’s truly “everything it’s cracked up to be.” (Get it?) They should put that on the menu!

Vegetable Escabeche: The Escabeche sounded really good and also, I like to say the word “Es-ca-bech-ay.” I knew if we ordered it, I’d get to say Escabeche a bunch of times (and I did) but it wasn’t my fave.

Mushroom Ricotta: This was one of my faves and if you asked me to go back right this minute for more, I’d go.

Duck Confit: The first time we went, one of our friends ordered this dish and he—unlike some people I know (my huz)—had no issues sharing. Duck is a questionable food choice for some, but if you’re into duck, this is the duck to get.

We also got a pasta dish. Hand Cut Pappardelle. HAND cut! Who is hand-cutting their pasta? NOT ME! Everyone tried it. Everyone liked it.

Venison Sausage: Is it deer? Is it pig? Who cares? It was GREAT!

I can’t speak to the desserts at Chartruese because they were too fancy for me: Madagaskar Vanilla Pudding, Apple Fritter and Strawberry Mousse. (I like super dense, rich desserts that give you cavities as you eat them so we went somewhere else.) I’m sure the desserts at Chartreuse are great if you like things like that though. How bad can they be? It’s dessert!

I only have one: The bathrooms.

There are two bathrooms at Chartruese. Each bathroom is a “oneie,” meaning that only one person can go in at a time. Normally, I love that because it’s nice to have a little privacy once in awhile. (If you’re a parent, you know of what I speak.)

The bathrooms at Chartreuse are unisex, and that would be totally fine if the BOYS WOULD FLUSH. Also, how about putting the seat down? That goes for the girls too, if they’re the type that vom after they eat, but I’m sure they’re not doing that at Chartreuse because what a waste of good food. 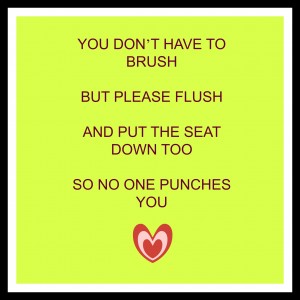 Check it out if you’re heading out that way or visiting Detroit! (And tell Sandy that Dim Sum and Doughnuts would go perfectly with his other cuisine!)

Thanks for being here! New site COMING SOON!

Let It Go
6 Tips For Running Errands With Kids
Different Approaches To Use With Your Kids That Really, Really Work!
You're Not Alone