During the winter of 2015, one of my friends posted a video chronicling three different athletes and their road to the Olympics. The video started on the ice when the athletes were babies. They were so cute, on their skates, falling down all over the place. As they grew older, they fell more. BOOM BOOM BOOM. Sometimes they had accidents—bad accidents—and they broke bones. But the bones healed, and the athletes got back at it.

They always got back at it.

It was a powerful video, and by the time all three of the athletes reached The Olympics, I was crying. I then made both of my girls watch it because why the hell should I be crying alone? No, gracias. Plus, it taught an inspirational lesson of perseverance, and maybe one I could “skate” out of if they just “watched the video.”

It’s now summertime, and my family is living at an overnight summer camp full of kids. The other day, as I was walking by the hockey rink, I was reminded of those athletes from the video. There were some kids playing in the rink, and one of them fell just as I was walking by. The oldest boy, a former camper, handled the fall perfectly. He yelled “You’re OK??” towards the kid who fell, but it actually sounded more like a statement than a question.

That’s because he knew the kid was OK. He fell down. No big deal. That’s part of it.

Whenever we learn something new, we fall down. The question isn’t whether or not we’re going to fall, it’s whether or not we get back up. And that’s not just with sports—it’s new jobs, new babies, new lifestyle choices, new “normals.”

Anything new has a learning curve.

The oldest boy who was “coaching” in the hockey rink, he has been coming to camp since he was very young and I have had the privilege to watch him grow. I’ve watched him fall many times over the years, in many different ways, but he has always gotten back up. It was cool to watch him help a younger kid do the same, because I remember a time when he was that kid. He has since learned the importance of practice and determination, the rewards it can bring, and the character it builds.

I have a daughter who also knows all of this, because we talk about it, but she couldn’t care less. At least not yet. She wants no part of Mommy’s awesome wisdom (her loss), and she wants no part of falling down. If she can’t do something (pretty much anything) perfectly the first time, she wants out. She will stomp off and claim she doesn’t “like it,” and I have to pep-talk her until she gets back in the ring.

It’s interesting living at camp with her, because even though I’m always usually accessible, I try not to make myself overly available. It’s not my place right now to talk my daughter back into something, or catch her when she falls. Sure, my instinct is to be there, especially because I easily could be, but I know I need to distance myself. While my daughter is at camp, she’s a camper, and my job, as her parent, is to let her go. This is her time to utilize the people around her (not me) to help her figure things out for herself.

My daughter will fall, just like that kid in the rink, and the athletes in the video. Everyone falls. It’s part of growing up, and it’s part of life. It’s only fair, though, to try again, because we’ll know more the second time around. We’ll know better how not to make the same mistakes. And if we get blindsided by something we weren’t prepared for—an unplanned hit that comes out of nowhere, (because that s**t happens)—and we go down, we’ll know better how to deal when we get up, because we have dealt before.

And then one day, because we have been there ourselves, we can teach someone else what we have learned, if they too should fall. 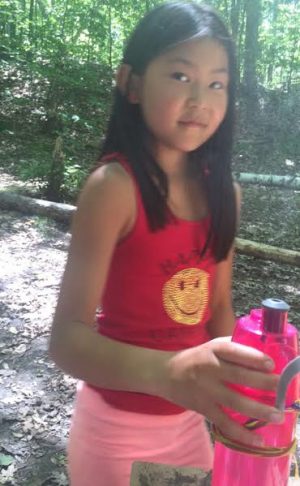 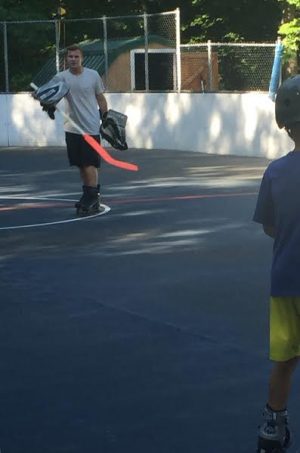