When my daughter (aged 13) doesn’t particularly like the behavior of someone from the male persuasion, she often refers to that person as a “DICK’s Sporting Goods.” An example of this would be: “Ugh. I can’t believe he just said that, he’s such a DICK’s Sporting Goods!”

When I first met my friend, Mona, he was kind of a DICK’s Sporting Goods to me. But before I tell you about that, I first need to explain some other stuff.

I met Mona in the summer of 2002 at Camp Tanuga in northern Michigan. He was probably 27 years old at the time. I was 30 or 31 and had been “dating” my now husband, Cody, for a few weeks via phone and email. As one of the directors of Tanuga, Cody moved up north at the end of April and stayed all summer. Getting to know someone via phone/email is great, but it’s not real life, so we agreed if we were going to consider pursuing a real relationship, it was time for me to visit Camp.

Mona’s real name is Marc, but everyone called him Mona. I was familiar with gender ambiguous names, but “Mona” was a new one. When I asked, “Why do you guys call him Mona?” The answer was simply: “Because when he was a kid he looked exactly like his mom, and her name is Mona.”

I found Marc/Mona to be very intriguing. He was super relaxed, funny and quick-witted. He was well connected, well read and very confident. The confidence thing threw me because, in my experience, guys who possessed that kind of casual bravado usually backed it up with looks or money — and Mona didn’t care about either one.

Mona was working at Camp (as he did many summers) as the Camp Driver. He loved driving. If Mona wasn’t waiting tables at The Stage in West Bloomfield, MI or Canter’s Deli in LA, he was driving. He drove hundreds of campers on trips all over northern Michigan and beyond. He ran all camp errands and proclaimed his job title to be “Cody’s Bitch.”

Whatever Cody needed, Mona got it, and it didn’t matter how far or how long it took, Mona didn’t mind, because he loved driving. He was a pro as long as someone else was in his care, but if he was alone, we never really knew what kind of condition the vehicle would be in when he returned. Over the years, Cody has started many conversations with a long sigh and “F**king Mona…” The two of them, though, they had a rhythm. They understood each other and Mona was always loyal to and respectful of Cody.

But that didn’t mean he had to like me: Cody’s newest girl, with my fancy luggage, and my fancy dog with his fancy, Burberry dog collar. So when I stepped out of my fancy car, that first time at Camp Tanuga, there was Mona, shaking his head like: “No way is she gonna make it the full weekend.”

That’s because Mona was Judgy McJudgerton from Judgytown — but he was wrong about me! I made it that weekend, and then another one a few weeks later, and then I just kept coming back. And though Mona was never outwardly mean to me, he certainly didn’t go out of his way to make me feel comfortable.

It bothered and humbled me that Mona wasn’t into me, (especially during those years because I was kind of cocky) but I understood. I was in a sorority. I know about loyalty and making others “earn it.” And since I had very little connections or ties to Camp, Mona made it clear forging a relationship with him wasn’t going to come easy.

I’m not exactly sure when Mona decided he liked me, but I do remember when he made his first gesture:

In March of 2003, Cody and I got engaged and we had three, maybe four engagement parties before the wedding. (It was crazy.) For one of the parties, we enlisted Mona to make a music mix since he had  admirable taste in music. He never went over the song list with us, and we didn’t think to ask.

It was all good until I started hearing the opening lines from the song Hey Lady by Obie Trice/Eminen. This song (a song that Mona actually introduced me to) though one of my favorites, could NOT have been more NOT appropriate for an engagement party. Swearing, the N word, gunshots – all of it –blasting through the speakers at the party venue. And not just once, three times during the night. I still remember standing with my arm linked through Mona’s, scared for Cody’s reaction when he started to really HEAR the lyrics:

Cody was not amused, but I knew Mona put that song on for me, and I was honored. That’s how Mona rolled though. No grand gestures; he showed his love in other ways.

He used to dog me repeatedly for requesting my water bottles at “room temp” and my sunscreen at 50, but he always made sure I had both.

During the summers that Mona couldn’t come to Tanuga and be the Camp Driver, he wouldn’t let me talk about how much I liked our new driver. As far as he was concerned, no matter how much I loved the new Camp Driver (and we have had some that I have truly loved), to Mona they were all “Seat Fillers” until he was able to come back.

He also wasn’t interested in material things or anything fake, including people. If he liked you, you knew it. If he didn’t, you felt it. He had stature and seniority, and he leaned into both. A nod from Mona was currency. Forget the “green pass,” if you had Mona, you had a different “in.” He had no money, but he had street cred — and if you’ve ever been around someone like that – someone who can get you “in the door” without having to rely on their wallet, you know how cool and rare that is.

Plus, whenever I felt like doing anything — especially something that wasn’t particularly “suburban,” I had Mona. From driving around looking for meth labs (don’t ask) to playing “Store” with my daughters, Mona never said “No” to me. He knew we were going to have fun — and I knew no matter what I wanted to do, he’d not only take me, but he would make sure nothing happened to me. Ever.

But Mona had me, too! Yes, I declined shaving his head when he bitched and whined about being “too hot,” but I had his back when he needed to wear something other than a Grateful Dead t-shirt or his brown, G-Unit hoodie. I was his moral compass and ethical boundary, and you better believe when he moved to LA, he continued to send me pictures of his bed made because he knew I’d be proud of him.

And I was. I was proud of Mona for so many things, and proud of the unlikely friendship we built. And now I am sad because he’s gone. I’m so sad.

I do a lot of walking and crying. It’s sucky. One of “our songs” will come on and I’ll want to text him, or some dummy will say “Rite Aids” or “Starbuck” and I’ll want to call him. I think of all the private jokes and adventures we shared and I feel sad because when we swore we’d take each other’s secrets to the grave, I didn’t think he’d be taking mine so early. What am I supposed to do now? How am I going to find another friend like Mona?

Of course, I’m feeling sorry for myself. I know healing takes time. I know there will be a day when I think of Mona and smile instead of cry, but not today. Today I’m still sad.

If Mona were here I know he’d gently say “C’mon, Rob. You got this.” And he’d be right, because I do “got this,” and I do believe one day Mona will send me someone special to help fill the void. And while I’m sure this person won’t have a huge Star of David tattoo circling his elbow, or the same relaxed vibe that always made me feel safe, I’m still expecting him to send me one hell of a seat filler. 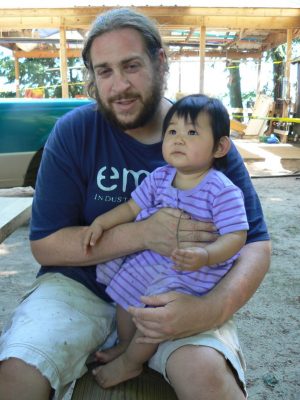 Mona and Frankie in 2008, her first summer at Camp 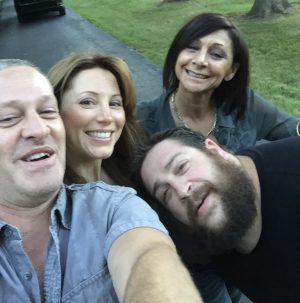 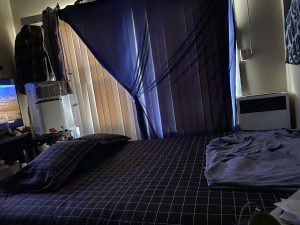 His “made bed” — and you know I didn’t let him send the same pic more than once. 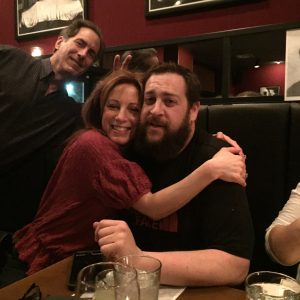 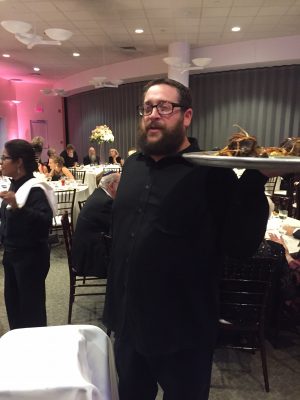 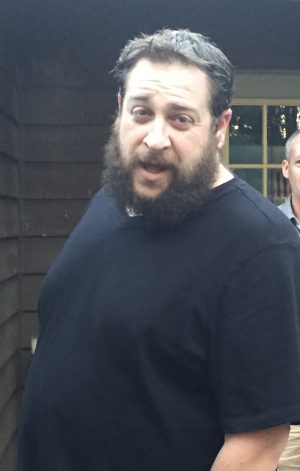 Thank you for being here. We hope you’re doing OK. If you have SUMthing fun to say about Mona or Tanuga, or if you’d just like to check in with us, we’d love to hear from you! This pandemic blows.

The Dim Sum and Doughnuts crew