If you haven’t read Part 1 of “Backstory,” you might want to read that first so you know what the hell I’m talking about:

Cody left. It was time to go. Camp prep waits for no one and it was imperative that my husband be there. Tis the season. We may not have had a kid on the way, but there were lots of kids coming to camp so off he went, and he took his super sperm with him.

Our lifestyle made it kind of difficult to get preggo since, at this stage in our marriage, I wasn’t at camp full time. I had a lot of trouble working remotely from camp and, truth be told, I wasn’t quite ready to leave my friends and family for three to four months. Plus, I had my fair share of summer clothes and shoes that weren’t camp appropriate and leaving behind a closet full of summer goodness also wasn’t something I was ready for.  As a result, I would drive 3-½ to 4 hours up north for three or four days of arts ‘n crafts, flip flops and Mess Hall food and then I’d head back downstate for three or four days of shopping, strappy sandals and dinner reservations.

I did a lot of reading that summer of 2005 when I was downstate and Cody was at camp. One of the books I read was about abandonment and orphanage care in China. I was very moved by what I read and I started connecting with the girls I read about in an inexplicable but powerful way. I knew for Kid 2 that I was going to push for China, but I needed to have Kid 1 first. It was time for a turbo boost.

I got VJ to move me up to fertility hormone injectables. Shots, baby. SHOTS. I was in the big leagues now. For sure shots were going to get me knocked up. Shots are serious. They are SHOTS. Here’s how they work: Once the follicles reach maturity, a fertility injection is given to finalize follicular development and initiate ovulation 34-36 hours later. During an IVF cycle, the eggs must be retrieved prior to ovulation or the cycle will be “lost.” No pressure, right?

One of the nurses (not the hack blood drawer) came in to show me how to inject myself. She explained that if I was going to inject the lower region of my stomach, I should switch sides every other day. We practiced a few times and then she sent me on my way. Unfortunately, I was so excited about the idea of shots—they‘re so bad ass—that when she went through her demonstration I wasn’t really paying attention. In other words, when I left the fertility clinic with a bag full of shots, I had no idea what to do with them. Not only that, but the day I was scheduled to start my shots, I wasn’t going to be at camp with Cody, I wasn’t even going to be at home—I was to be in Jamaica, for a family wedding. Yah, Mon.

I probably should have waited to start the shots until I got home from Jamaica, but that would have been a whole cycle of waiting and how could I do that? I had a bag full of SHOTS. I wasn’t going to wait a month and I wasn’t going to skip the wedding. So off to Jamaica I went, with my shots.

Yep, I brought drugs to Jamaica.

Who does that? There are people who get drugs when they’re in Jamaica, there are even a select few who take drugs home—but who brings drugs to Jamaica? I think the airport security and customs people also thought it was a little odd that I was bringing pharmaceuticals to Jamaica, but I had a doctor’s note from VJ that basically said it was OK for me to bring sand to the beach.

My second night in Jamaica was scheduled to be the first night of my shots. On the way back to the hotel from dinner, I was in a cab with my brother and sister-in-law. We were all discussing who ate the most (me) when the cab driver unexpectedly asked if we wanted him to take us to get some cocaine. Yes, please Mr. Cab driver. Please take us to some really scary, remote area of Jamaica so we can get killed. We started cracking up and I proudly said: “Thanks, but I’m good. I have shots!”

I was really excited to try the shots. Is that weird? I felt like I beat the system and it was time for the blood money. My insides were in good working order, everything was open and ready for business and Cody’s junk count, as he liked to remind me, was worthy of getting him a seat next to Superman at the Hall of Justice dinner table. Of course, I felt a little guilty about leaving VJ under the impression that I tried for a year to get pregnant before coming to see him, but whatever. A year…three months…same thing. I wasn’t getting any younger and I thought for sure the shots would be just what I needed to get party started. Besides, how hard could the shots be?

I totally screwed up the shots. Since Cody was up at camp preparing for the season, my mom got stuck helping me. She came into my hotel room and we did a practice run but somehow, I still don’t know what we did wrong, we messed up. Well, I messed up.

We cleaned and prepped both the work area and the area on my stomach. I’m quite sure we did that right, but that was probably about it. There were vials and powder and lots of instructions. There were needles and caps and I had to measure stuff. I was supposed to extract something from one vial and dump the goods into another. Air bubbles needed to not exist and the diluent was supposed to measure up to 1 ml. Something like that. Who knows? All I know is somewhere along the way I screwed something up, but I loaded the syringe with what I had and stabbed myself in the stomach anyway.

It could have been all the hormones in my system or maybe I just missed my husband and resented the hell out of him for not being there—I don’t know—but when my mom (who thought I was completely crazy to be doing all this fertility stuff in the first place) set aside her opinions about my crazy train shortcut to parenthood and instead put her arms around me and breathed “Oh, honey…” I totally lost it. I was tired, I was  frustrated and I was done. Well, almost done.

I left a frantic message for VJ and when we finally spoke the next day he settled me down, walked me through the process and prepped me for Day 2 of my shots. My mom and I went though the whole process again and this time I hit it out of the park. I had it down. I sent those shots HOME.

The thing is, I was starting to get a little disenchanted with the fertility process. What I once saw as a super smart shortcut had instead become a very stressful, very intense and very expensive experience. My mom (as usual) was right. I wasn‘t infertile, I was impatient. And there was no such thing as a fertility fast pass. At least not for me.

When I arrived home from Jamaica, I went back to see VJ for one of our scheduled appointments. I was in the waiting room, waiting, and then I made a split second decision.

It all happened really fast. It was surreal. One minute I was there flipping through some lame doctor’s office magazine (people always steal the good ones), and the next minute I was out the door.

I just got up and walked out. I was done. I didn’t even say good-bye to VJ. …I wonder if he misses me?

There are people who engage in fertility measures for a much longer time than I did, and I commend them wholeheartedly. It ain’t easy. I lasted a total of four months. I didn’t like what it was doing to me. I didn’t need it to get pregnant and I certainly didn’t need it to start a family.

Walking out of that office and out of that building, I felt such a sense of relief. My decision to switch the order from “have one, adopt one” to “adopt one and maybe have one or maybe adopt another one” was a game changer but curve balls are a part of life.

We wanted a family and we always knew that any baby could be our baby. I just figured I’d have one and then adopt one, but things don’t always work out as planned. Sometimes though, they work out for best.

If you want to know more about our road to adoption, there’s a whole blog about it: www.codenbaby.blogspot.com.

FuLanmania: A blog of Chinese Adoption and Clueless Parenting. Check it out! 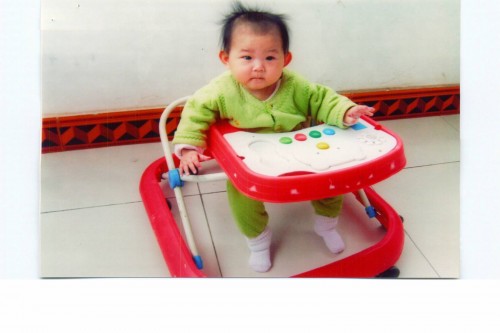