My husband, Cody, is one of the directors of an overnight camp for kids in Northern Michigan. Every year, Cody moves up to camp at the end of April to start setting up. My girls (4 and 7 years old) and I visit when we can, but we can’t move up for good until school is out.

We only live at camp during the summer, but it’s a part of our lives all year round. It’s not just a job, it’s our lifestyle and part of who we are.

And we are very lucky.

But with that lifestyle comes responsibility. We work with kids so we are role models, whether we want to be or not. For me, it was an appointed position. I never filled out an application, there was no interview, I got in by marriage and the position, quite honestly, was one I was not completely prepared for.

Cody never told me what being the wife of a camp director would entail. I don’t think he was intentionally holding it from me, I just don’t think there was ever a good time or a good way to explain it.

Before I got married, I was fairly anonymous. I worked, I hung out with my friends—I did my thing. I wasn’t a wallflower, but I most certainly wasn’t in the public eye. There was no social media and I never ran into my work clients outside of meetings, so whatever I did in my personal life affected me, and only me.

It’s not like that now. I’m a grown-up (sort of) and a mother, and I need to be accountable for my actions—not just for those reasons, but also because of camp. I am responsible to camp.

I know what you’re thinking: Who cares? It’s camp. No one cares what you do. You’re not a teacher, or a Rabbi—you can do whatever you want. But you’re wrong. People do care. And they should. We work with kids, and when you work with kids you should be held to a different standard. Part of working with kids is to set a good example and it’s our job to make the parents feel comfortable that they’re sending their kids to live and grow with people who aren’t total lunatics.

For example, when I was pregnant, there was pressure. I didn’t like that. I was completely and totally responsible for the well-being of someone else. When you’re pregnant, you have to REALLY take care of yourself and you’re not allowed to party or eat feta cheese. No cigarettes? Fine. No booze? No problem. But no feta cheese? I live in the suburbs of Detroit. There’s a Greek restaurant on every corner and mama wants her Greek salads!

Being pregnant with my first kid was easy because I wasn’t the one who was pregnant. The birth mom in China had all the responsibility, so while she was keeping up with that, I was probably at some Coney Island stuffing my face with 12 pieces of spinach pie.

Don’t get me wrong. I’m not for one minute complaining. Yes, I have to roll Rated G because of my camp affiliation, and yes, losing my anonymity and my husband for several months of the year does sometimes suck, but the rewards we get from our lifestyle greatly outweigh the loss so I wouldn’t dare complain. I’m just saying that if I were to be totally honest, I would have to admit that I’m not always up for it.

Like this one time I was driving to my friend “Malk’s” house and some loser cut me off so I, instinctively, threw my hands up in the air like “WTF???” and he SAW me do it! When I pulled up next to him at a light, instead of saying he was sorry he gave me THE FINGER. So I yelled “Real classy, Jack!” and he yelled “My name’s not Jack!” and I yelled “It is when it’s short for Jack A$$!” …and then I was all proud of myself because that was kind of a funny comeback, and then I kind of freaked out, not because I thought he might pull a gun, but because he might be a parent of a camper, and that could make visiting day kind of uncomfortable.

Where I live, people connected with camp are all over the place, and for the most part, that’s fine because my personality is such that I really do have the right disposition for it. I love the kids (except for the annoying ones) and I love the parents (except for the annoying ones) and whatever bad stuff I do when I‘m not around them (a lot), I just make sure I don’t get caught.

And I have been lucky. I just have to be aware of my behavior and the repercussions associated with it. But, honestly, that’s not such a bad thing (especially for me) because really, couldn’t we all use some guidelines and boundaries? As we get older we have less and less people to help monitor our behavior, so, in many ways, it’s nice to have camp to help keep me in check.

It’s ironic that one of the major benefits of camp is that it teaches kids how to make good, responsible choices because I’m probably lacking in that area more than any camper.

One good choice I have made because of camp is that I don’t really swear a lot on my personal Facebook page. There are campers who have “friended” me on Facebook so I try to be careful. Rated G, yo.

I have a friend, “Maddy” who doesn’t have to be like that at all. Maddy has a huge heart and she’s truly a good person but Maddy flat-out could care less what anyone thinks of her. She’s not accountable to anyone. She‘s doesn’t have to be, but even if she was, I still don’t think she’d care! There’s some definite freedom in that.

Maddy decorates her Facebook page with all kinds of things, and the people on her friend list know her well, so we all know what to expect. I love the things Maddy puts on her wall, but I feel like it’s probably better left on her wall and not on mine: 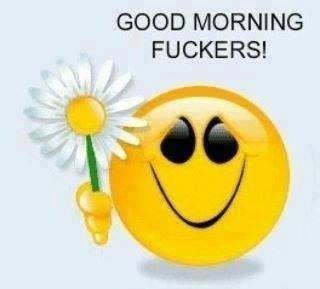 When I was in my 20’s, I didn’t know to care. When I was in my 30’s, I did care. Now I’m in my 40’s and I just don’t have the time to care. It’s exhausting! As I look around my friends who are mostly in their 40’s, I see that we are all in a very similar place. The things that used to bother us, don’t bother us anymore, and no one really has time to care what anyone else thinks. I’m kind of bummed that I still have to, I feel like I’m getting ripped off.

I do my best to set a good example for the kids, not just my kids, but also the kids at camp. For the most part, it comes easily to me because that’s how I’m built. But, at the same time, I am who I am, so there is a chance, a good chance, that I might mess up sometimes.

Fingers and toes crossed that I don’t get caught!