The story goes that the bee was buzzing around her but she stayed really still and he left. But then he came back. She says he came back and hid inside her pants until she was inside our cabin playing with her sister—and then he stung her on the leg.

It hurt my daughter when she got stung. Getting stung by a bee hurts. I haven’t been stung since I was a kid, but I remember it NOT fondly, and if I could go through life without it ever happening again, that would be great.

But let’s be honest, getting stung by a bee isn’t the worst thing ever. There are worse things. I gotta believe getting something cut off, like a finger, would be worse.

Not to F! Even after we got through the tears and the Benadryl, we had to re-live the story like 30 times. Her answer to everything for the next several hours was either “I can’t, my leg STILL really hurts!” or “I’m never going outside ever, EVER again!“

It’s possible I pushed her to move on a little too soon though. She is, by nature (or nurture, I’m not really sure because she’s adopted) a bit on the dramatic side. I was over the bee. Time to be done with the bee!

And it wasn’t just me. I think everyone who was around for the bee aftermath was feeling the same way, I was just the only one who said anything. But maybe I’m wrong. Maybe I’m just a really impatient b**ch of a mom.

And if that’s the case, trust me, I got mine.

Before I tell you what happened, in order for it to make sense, you need to know something:

I am a very big Eminem fan. (Many, many years.)

I love Eminem for many reasons. Suffice it to say, the days I get to see him in concert are GOOD days. Those days are like my birthday x 1 million zillion trillion. I don’t want to meet him, but I do love to see him, and this past Friday, right before he got on stage, right before I was about to be in a very happy place, I got stung by a bee. IN THE FACE.

I was in the “Pit” section of the stadium. That’s the area right in front of the stage that houses a bunch of other big Eminem fans—commonly referred to as “Stans.” (My husband calls me “Stan.” He got me this license plate. He thinks he’s funny.) 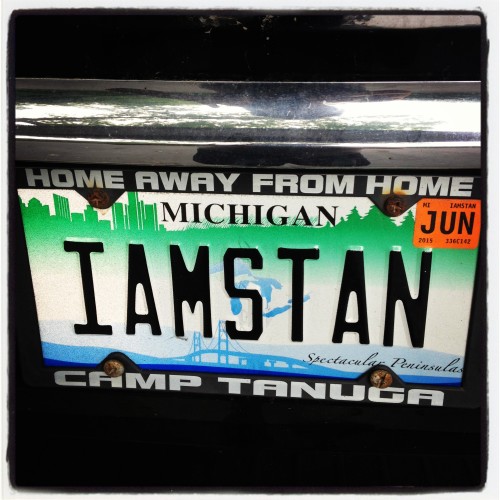 I am either the biggest fan or the biggest loser, it really could go either way at this point. Anyway, the concert was outside at Comerica Park in Detroit and it was pretty hot out (and even hotter in the “Pit”). The other “Stans” and I were cramped into some pretty close quarters and most of us had been there for around 2-1/2 hours. People were sweaty and yucky and anxious— and for the life of me, I still can’t figure out why a bee would want to come into that mess.

But one came, and it came for me.

It came RIGHT for me, with a vengeance. It literally came from OUT OF NOWHERE and got all up in my face and started going psycho. I totally freaked and started waving my hands all over the place. The people around me were like What the hell?? And right when I thought it was over, right before Eminem took the stage, that little a-hole somehow got up under my baseball cap and stung me, BAD, on my forehead.

What is that about, you ask?

I’ll tell you what. It’s karma. I warn my kids all the time that if they do bad things, bad things will happen. I’m not saying bad things won’t happen if you do good things (we all know that’s not true) but I am saying that it’s probably smarter to err on the side of trying to be good. It just usually seems to work out better.

Unfortunately, I sometimes do bad things, nothing big, but usually something bad pretty much every day, so right after the sting, I started scanning my brain for some kind of viable reason why a bee would come out of f’ing nowhere and sting me 2 MINUTES BEFORE something I was so excited for.

At first I thought Eminem sent the bee over to me because he was mad that I wasn’t close enough to the stage, but then I thought That’s his fault. He should make a section just for me. And then I remembered something from earlier that day that I maybe shouldn’t have done and decided that’s why I got stung. Good enough for me! The show was starting so unless my face started blowing up all crazy and stuff: 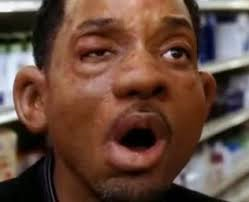 I was just going to ignore it and move on. It throbbed and it hurt, and I was a little concerned about whether or not the stinger was still in, but whatever, it was show time, baby! 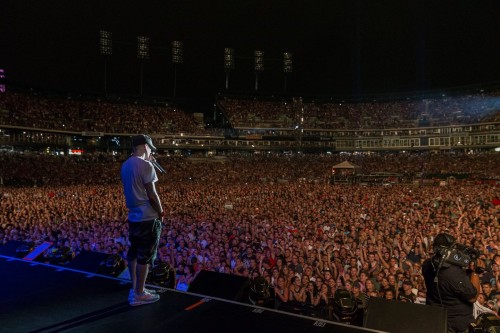 The next day though, things got worse. My forehead was redder and everything was itchy and parts were starting to swell up.  One of my girlfriends helped me decide that my “bee incident” was definitely karma related, but not for the reason I suspected. She thought it had more to do with how I dealt with F when she got stung. It seems that I could have treated my daughter with a little more patience and compassion. It’s possible that not everyone gets over pain as quickly as I do.

I apologized to F straightaway. I figured I was home free after that. There was a hug and everything! Nope. Things only got worse. The next morning, I woke up to all kinds of bad stuff happening on my face including my right eye being swollen shut.

So there I was, standing in my bathroom, pleading with the ceiling… “I GOT IT!!! I’m the worst parent EVER!! I promise to be more patient and compassionate, just call off this crazy karma curse!”

I’m going to try to do that because even though to me, getting stung by a bee in the grand scheme of things isn’t THAT big of a deal—to my kid, in her world, it is.

I got it, Karma. I swear, I got it. MESSAGE RECEIVED.

When You're Feeling Left Out
Different Approaches To Use With Your Kids That Really, Really Work!
Doctor, Doctor!
My Biggest Adoption Mistake