When my daughter, F, was in kindergarten, she asked me how to spell the word FREELOADER for a homework assignment. I thought it was funny so I put it on my Facebook wall.

After the photo went up, someone very special sent it to the right person and it went viral.

F’s online presence was a fun time for our family, especially F. She got a little bummed when her piece was introduced on TV and the host assumed she was a boy— but still, she enjoyed her early moments of online fame.

F’s homework made a lot of people smile, but not everyone.

Some people didn’t find it humorous at all. I remember taking a moment to read some of the comments and I was shocked by what I saw. People were RIPPING me. Not everyone, most people loved it, but a lot of people didn’t. Some mocked us for not having good values, some presumed that we were “on welfare living off the system,“ and some turned F‘s answer into a commentary on the state of our nation.

That was the day I learned: What’s funny to some, isn’t necessarily funny to all.

The thing is, I didn’t care. I have thick skin. And, as far as I was concerned, they were crazy.

The same kind of thing is happening again, except this time the people who are ripping me might have a point.

There’s an old post on the Dim Sum and Doughnuts site that I recently re-released for “Throwback Thursday.” The piece is called “Top 10 Annoying Comments and Questions for Adoptive Parents.” (Don’t go to it yet, the part you want to see is no longer there anyway.) It seemed like people were enjoying the piece, especially people who have adopted, so I put it up in a few online adoption rooms. I only did it because I thought it would make people smile, but I was way wrong.

One of the Top 10 “Annoying Questions” that I stated on the post was “Is your husband Chinese?” and my response to that was I have never been offended by that question, I’m just not into Chinese guys.

The controversy sparked by that line was not something I was prepared for. When the piece originally went out 3 years ago, no one ever brought that line to my attention so I never gave it a second thought. I didn’t mean anything by it. Chinese guys were just never my thing.

But this time around, people were offended. Like REALLY offended: How can I say I’m not into Chinese guys? That’s like saying that I’m not into black guys (I am, by the way.)

I thought to myself: I wonder how I would feel if I read some piece and the writer wasn’t into Jewish guys. Would I care? No, but that’s not really the point.

Yes, I let my kids listen to inappropriate music. Yes, I make them wear clothes they HATE to school as a punishment for lying, and yes, I let them skip school and we went to a bar in the middle of the day where they drank Shirley Temples and ate like 50 maraschino cherries.

But, what’s so great about being conventional?

The readers that were blasting me, they don’t know me, though I can’t say they didn’t give me a chance because they found another post and shredded that one as well. (In fact, one person suggested that I get F to an “adoption/trauma therapist.)

I don’t know…I could be wrong, but she seems OK to me: 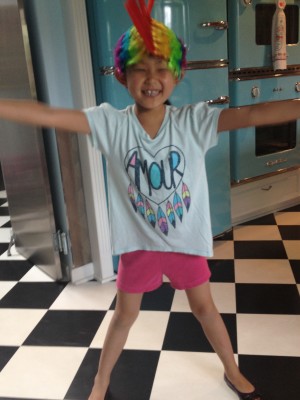 But what kind of writer am I if the people who don’t know me, don’t get me? Isn’t the whole point of writing to connect with people? Clearly I’m not conveying myself properly if I’m pissing so many people off. Or maybe I’m just not connecting with the right people?

I thought the adoption community might like to read about how one family deals with adoption. (I have never asked anyone to follow my lead, I just thought it would be cool to share.)

I thought the millennial generation girls might like some insight into what their future holds. (I wish someone had given me a “heads up” when I was younger, maybe I wouldn’t have f**ked up so much—probably not though.)

I thought the camp enthusiasts might like a place where they can re-connect with the magic of overnight camp. (It doesn’t matter if they went to our camp, camp is like pizza, it’s all good.)

I thought the baby boomers might like to see that no matter how much things have changed, the fundamentals are still pretty much still the same. (I love the “Been There, Done That“ generation. Nothing offends them anymore.)

And I thought moms might like to know that they are not alone in this crazy thing called parenthood because here I am, and I mess up A LOT but my kids are (at least for now) fine.

I don’t mind being called out. I invited that when I decided to put myself out there.

At this point, though, I just want to have some fun. And by the way, my friend MG is Chinese and her brother is super hot. I forgot about him.