My youngest daughter, Lovey, is currently due for her 2-year-old check up. The doctor’s office is in Petoskey, a cute little town in northern Michigan about 45 minutes away from camp, so I decided to make a day of it.

Lovey was due for several vaccinations but I won’t do more than two at a time. I had to choose between Hep A, Hep B, MMR and DTaP. I decided to go with the Hep A shot because “A” comes before “B” and I went with the DTaP over the MMR because we are currently living at an overnight camp for kids and I figure the chances of Lovey stepping on something potentially harmful greatly outweigh the chances of a Rubella outbreak.

I told the nurse I’d get the Hep B in 6 months, but we’d be back in a few weeks for the MMR. I could tell that she didn’t understand why I didn‘t just add the MMR to the other two, especially because the doctor’s office is kind of far, but I didn’t care. I’m not letting my kid get more than two shots a time. Also, I like leaving camp for a bit and making a day trip out of going to Petoskey. Lovey and I get to wear something fun instead of our “camp clothes,” and Petoskey has great boutiques for shopping and good restaurants for face-stuffing.

Plus, whatever with that eye-rolling nurse. My kid is my kid. Four shots at one time is just mean. If she wants to jack  her kid up with more than two vaccinations at a time, that’s her choice. I hope she remembers the lollipops.

While we were waiting for the doctor, the nurse began asking routine questions.

Nurse: Is she eating? Is she happy? Can she put two words together?

Me: Yes, yes, and yes. Sometimes what she says isn’t real clear like “Let‘s Go!” sounds a lot like “YOU’RE A HO!” but yes, she is putting two, sometimes even three, words together.

Nurse: Great! What is happening in her life that is new?

Um, everything. Is that a real question that nurses ask? I guess it is because she asked me. New stuff happens every minute. She’s two.

Meanwhile, while Lovey and I were at the pediatrician, my husband, Cody, was at the Vet with our stubby-tail Golden Retriever, Floyd Coden. Floyd Coden, for the last two nights, was panting really loudly. He only panted at night, but he was doing it all night. We didn’t worry or question his behavior the first night because it was crazy hot and there is no A/C in our cabin. We figured his incessant panting was due to the heat so we put a big-ass fan in front of him, threw down a bowl of water and told him to have sweet dreams of a cool, air-conditioned doggie place called SHUTTY-TOWN.

Floyd Coden seemed fine the next day but we placed him on Double Secret Probation and only permitted him to wander camp during certain times of the day. During that time he was on his own and left to his own devices.

That night, the night before Lovey’s doctor appointment, Floyd Coden was up all night again. And so were we. It wasn’t super hot in the cabin so my annoyance from the night before quickly changed to concern. What the hell was up with Floyd Coden? I could tell Cody was worried too so, as usual, we resorted to our first line of defense: Google.com.

Thankfully, we are idiots. Cody took Floyd Coden to a reputable vet the next day. After an hour drive there and back, about 5 billion dollars in blood tests, IV’s and x-rays that were sent to a doggie cardiologist, we came to find out that Floyd Coden somehow scored and ate a 5 lb salami (wrapper included) at camp and it was most likely the cause of his discomfort and our sleepless nights.

The Great Poochini had a belly full of processed meat and sodium, and although he wasn’t home free, it seemed that our scrappy dog had, once again, dodged a bullet.

When Lovey and I got back to camp, Floyd Coden was resting comfortably in the cabin and Lovey cozied up to me instead of running around with all the campers. That is unusual for her but I figured that after a long, hot day of shopping and shots, she was beat. When Sweet Pea, my 4-year-old came barreling through the door announcing that it was “Naked Time!” Lovey didn’t want any part of it. That, also, was a little odd so I scooped her up and held her close as we rocked in the rocking chair. It wasn’t long before she looked up at me and proclaimed: “Belly Hurts.”

What? Belly Hurts? Yay! Look at Lovey, with her two words! Belly Hurts. One, two. Very nice and clear as day!

I wanted to call the nurse from earlier and tell her that Lovey had a new two word-er. I had never heard her say that before. Belly Hurts. So cute! I pulled her a little closer and kissed her all over while she, in the meantime, lifted her shirt, stuck out her belly and once again announced: “Belly Hurts. Belly Hurts. Belly Hurts.” OK, honey–seems like you’ve got that down. No need to put it on repeat. Let’s do some other two word-ers. How about “Mommy Awesome!”

And right then, the only thing missing was George freakin’ Clooney because damn if the Perfect Storm didn’t hit our cabin: Cody walked in, Floyd Coden resumed panting and little Lovey tossed her cookies. All the milk she just drank went flying, projectile style, nailing me on the shoulder and all over the side of my face.

Cody and I were stunned. We just stood there like two morons with our hands open under Lovey‘s mouth—like we were ready to catch round two or something. And Sweet Pea, such a huge help, she didn’t move a muscle except her head as she looked over at us and surmised: “Lovey barfed!”

It’s amazing how an ordinary day can become extraordinary as we blink. Everyone has days like this so, as you can imagine, when a nurse asks: “What’s happening that is new?” it’s hard to respond.“Where do I start?” isn’t much of an answer. I know these days won’t last forever, and even though some are really hard and we go to bed exhausted and defeated, there is a large part of me that wishes I could keep things the way they are right now, forever.

I want to bottle my girls’ laughter and the way they run around squealing and singing, but I can‘t. I want Floyd Coden to stay with us and be a part of our family forever, but he won‘t. And sometimes (a lot of times), it makes my eyes water and my belly hurt. 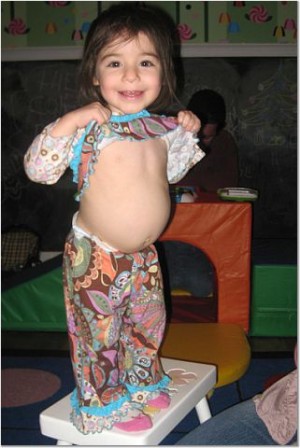 Half The Story
Are We Closing The Book On Bookstores?
4 New Games For Your Kids
Birth Day