There are tons of articles floating around about the benefits of overnight camp. (I have even written a few myself.) But this one is different. There are no moving pictures and it’s not a Top 10 list—in fact, it’s actually just about ONE thing.

Before I start, I should explain that during the summer, I live around a bunch of kids (so many kids, kids EVERYWHERE!) at an overnight camp in Northern Michigan—and I don’t know why it took me until today to realize this but it did:

The inherently cooler kids will not go unnoticed (that’s just life, it’s human nature) but at camp, if you’re a CIT (the oldest group of campers) the younger campers will think you’re cool JUST BECAUSE you’re a CIT. The younger kids, they don’t know the actual coolness factor of any given CIT, and they don’t care, they’re too busy looking for their other flip flop or trying to make it to the mess hall without tripping.

As with most things though, being the “coolest” and being a CIT comes with some responsibility. (*Long sigh*…there’s always a catch.) In school, the Seniors don’t owe anything to the Freshman. They’re Freshman, who cares about them? At camp though, the CIT’s are the “Seniors” of camp, and they owe.

They’re at camp to have fun, but they also have some work to do.

A lot is expected from the CITs. They have gone up the ranks and it’s now their job to help make the summer amazing for the younger campers, just like the past CITs did for them. They run programs, teach songs and make memories. Some of the CIT’s are not so great about that, but most of them are.

I still remember once, years ago, when a really young group of boys (probably 8 year olds) were playing dodge ball with an older group (probably 11/12 year olds) and the older group was showing NO mercy. It was a slaughterhouse! As I walked by, one part of me was all “Life lesson, boys! Duck!!” but the other part of me was “Really??? You need to throw THAT hard? That kid is so little, and he’s  already on the ground!”

But then, out of nowhere, a huge group of CIT boys jumped into the game and split up on the younger kids side. THEY PUMMELED THE CRAP OUT OF THOSE 11/12 YEAR OLD BOYS. It was awesome.

Those big boys got schooled, the little boys were vindicated and because of the CIT boys’ awesomeness, everyone walked away with a memory that will last a lifetime, including me. 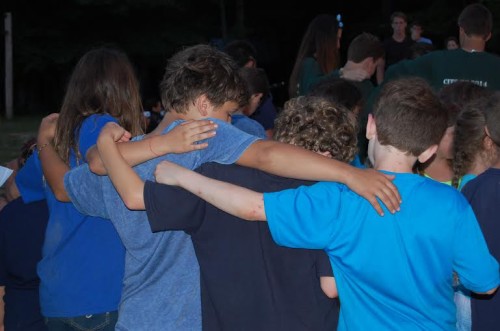 If you know of anyone else who might like Dim Sum and Doughnuts, please pass it on!