During the final weeks leading up to the 2016 presidential election, my 7 year old (JJ) asked me every day: “Mommy, who are you voting for?” And every day I’d respond the same way: “I’m not telling.”

It made me sad that I didn’t feel proud or comfortable telling JJ who I was voting for. It was the first time she was interested and excited about a presidential election. (She was 3 years old during the last election–she didn’t even know what day it was.)

Presidential elections are exciting for kids. They like discussing and defending “their” candidate with their peers. JJ was coming home every day with new info she learned at school. She loved the hype and the drama.

And who can blame her?

When I was her age, I liked it too. Whoever my parents were backing, that’s who I backed. I listened when they discussed the issues and candidates. The things they said made sense to me. Plus, I had no other real information coming my way, so I picked up as much as I could from them, and regurgitated it when I got to school.

My kids weren’t able to do that. They weren’t able to go to school with insight from us. We kept our mouths shut around them. There was so much anger and outrage in the air, people “de-friending” people, berating them for the views—I didn’t want my kids to get stuck in a $h*tstorm, so I stuck to speaking broadly on the topics. Plus, I didn’t really know how to accurately explain what was going on. This election was not the kind of presidential election I was brought up on. It was a circus, and when my husband showed up with this sign for our front lawn: 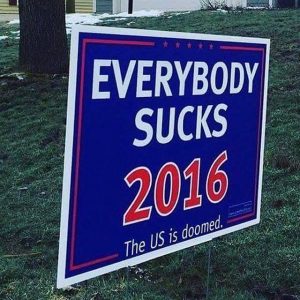 In all the years I have been voting, I can’t remember a perfect candidate in a presidential election. But, even if I didn’t like the two candidates, there was always one who was better. Always.

This year though? No. Not for me. I had a very hard time getting behind either one.

Donald Trump? Whaaaaat? Still surreal that he not only made it as far as he did, but he won! People must have really NOT wanted Hilary Clinton in office, because DT is a freakin’ train wreck. At first, I think people were intrigued. He was bringing issues to the surface in a way that was both NOT politically correct and NOT presidential. Everyone had an opinion, and he had everyone’s attention. He essentially became a character from one of his reality shows, but he wasn’t acting. And he wasn’t letting up. He went from being not presidential to downright disrespectful. He made it so every intelligent conservative out there was screwed because I gotta believe, even for the die-hard conservatives, it was getting harder and harder to defend him. The Islamophobic, xenophobic, and racist rhetoric he spewed—so venomous—it’s amazing he is still able to speak with both of his feet wedged so firmly in his mouth. He is one bad hombre.

And Hillz? WTF, girl?? What happened? You had such potential! Or maybe you didn’t? You had such a strong backing and a great resume though! And you’ve been in the world of politics for like EVER. You know everyone and you know how to play the game. Women all over were RIPE to put a female in the oval office. Even Vogue magazine endorsed you, and they haven’t publicly endorsed a presidential candidate ever. But people weren’t having it. I don’t even think it had anything to do with you being a woman. I think this country is past gasping at a woman president. I think they just gasped at Hilary. And why is that? Maybe because she’s suspected of being a huge LIAR. And if the things she’s suspected of doing are true, she could have put the people in this country, the very country she wanted to lead, at great risk. That ain’t good. How can you have a leader you don’t trust?

I guess you can’t, because she didn’t win.

So, here we are. Donald Trump is going to be the president of the United States. The decision has been made, and whether we like or not, we have to live with it.

So what do we do?

We persevere. No more bitching about what would, could or should have been. We deal with what is.

The first thing we need to deal with: Racisim and Anti-Semitism. It’s out of control. It seems since The Donald won the election, some people think it’s OK to say hurtful things, and commit racist or anti semitic acts.

It’s not. It’s shortsighted and ignorant and stupid.

But there are lots of dumb people out there, and some of those dummies have kids, and they say or do things in front of their kids, and the kids believe it.

And sometimes they act on it:

At a high school in Minnesota, someone left graffiti with the messages “Go back to Africa” and “Whites only.”

The principal from a school in Montgomery County, Maryland sent a letter home after swastikas were found drawn on the walls of the middle school.

And some kid in Dallas, Texas asked my girlfriend’s daughter (adopted) if she was scared Trump was going to make it so she couldn’t live with them anymore.

These kids are getting this from home. FROM HOME.

So that’s where we need to start. We can teach our kids that it is utterly ridiculous to mistrust or dislike an entire group of people. That way, if it ever comes up in their presence, they will know from us that it’s wrong.

We can also teach other people’s kids if we see it happening. (#ItTakesAVillage) And it’s such an easy thing to teach because “How can you dislike an entire group of people without knowing them all?”

It’s so dumb, but it’s happening. It’s happening a lot. And it needs to be recognized and acknowledged and discussed so our kids know it’s WRONG if it surfaces around them.