You know, it’s funny. After all the summers I spent living at Camp Tanuga, I never really paid attention to the differences between boys and girls until my visits this summer. I think it’s because when I was living at camp I was immersed in it–but now I’m back to being just a visitor so I’m able to see things with fresh eyes.

For example: The Boys. I have always loved hanging with boys, at camp and in general. I don’t have boys; I have girls (8 and 10 years old) so the boys at camp fill a need. Plus, boys are pretty easy, they don’t want much. They mostly tell me when they’re leaving for their trip or they’re bragging/complaining about all of their various injuries. Some boys are legitimately hurt from taking a chance they probably shouldn’t have, and some are more “Fake-It-Til-You-Break-It— but either way, the vibe on the Boys’ Side is usually pretty steady, and totally different, from the vibe on the Girls’ Side.

Because girls are a whole different story.

For sure there are always a few girls with something that “hurts,” especially the younger ones. It’s not always so easy to be away from home, and little “Hurts” will get you a little extra attention. But still, my own kids pulled that lever a few times this summer and they have no business looking for any extra attention as their daddy is at camp full time (he’s one of the directors), and mommy still makes occasional visits.

But then I feel bad getting annoyed with them because I should know better. I lived at camp for enough years to know how hard it is not to get caught up in the culture

Camp is a different world. The pictures we see on social media, the letters we receive—they are a short glimpse into a long day—a day filled with one million zillion different moods and emotions.

The reality is, unless you are at camp—truly living it—you really have no idea what is going on.

It’s not our place to know what’s happening at camp. That’s part of the magic. Trying to make camp life our business is like trying to figure out what’s going on in the Oval Office. We never will because we’re not supposed to.

Which is fine until we see a photo or get a letter that leaves us concerned.

The letters I got this summer were pretty much as follows: JJ (my 8 year old) wrote that she was having the best time, she loved the trapeze, and was excited to come home and work in the new boutique we are opening. F (the 10 year old) basically just sent requests. Her letters threw out a little love, but the love she sent was mostly padding for the list of items she forgot and/or wanted sent up.

I was fine with my letters so I never really felt the need to check on my kids. Plus, I’m dialed in enough. Half the time my husband would go to give me info and I wasn’t interested. I already know the older one is a P-I-T-A (pain in the ass) and I’m well aware the younger one will ONLY wear boots all the time, even if the zipper is broken. I’m not new. I spend plenty of time with them, much of it while my husband is away. I earned my time off. They are CAMP’s problem now!!!

But what’s so great about overnight camp is that while your kid is off growing and learning and making memories and friends, you get to do your thing without worry because (and I think I speak for all overnight camps when I say this) if there was a REAL problem at camp, you would get a call. If you’re not getting a call, you can feel good about what is happening there—even if the picture you saw or the letter you’re holding says something different.

When it comes to girls, the letters they send and the stories they tell don’t always reflect the full story. They reflect their version.

The last time I was up at camp, when I was leaving to head back home, my youngest daughter and a group of other little girl campers cut me off. They marched up to me, hands on hips like they were the freakin’ Pink Ladies and I could feel some serious D R A M A about to unfold.

JJ (my 8 year old daughter): Um, Mommy…we HAVE to talk to you. “Soenso” is being REALLY mean to all of us. (cue mini hair flip)

Me: Who?? Soenso?? I love that kid. I’m sure you’re overreacting.

JJ: Yeah!! And MOMMY…she was also really mean to F! (Her sister/my other daughter, 10 years old) She kept calling her FU-LAN saying that’s her REAL name.

Me: OK, well, FU-LAN is her real name. It’s her Chinese name, your sister is adopted from China.

Me: What is this?? Are you all for REAL right now? Is this happening? This is the dumbest conversation I have ever had. I’m out. Love you guys. Have fun at camp!

The whole thing was so dumb. Of course, it helped I had just seen F about 5 minutes before and she didn’t even mention the incident. But even after I told JJ and the rest of the Pink Ladies how dumb their drama was, they still huffed off looking to find someone who would sympathize with their discontent.

If all this had gone down over rest hour, I can’t even imagine the letters that would have gone home. All those girls…so heated…in the moment. The letters could have gotten ugly, and something for a parent to be concerned about.

That’s when we need to remember we’re only getting part of a story from a world we’re not even a little bit a part of.

As adults, most of us don’t live in a camp-like setting so if we sense any kind of time-wasting drama, we’re able to make a clean break. But it’s different at camp.

They want a response to their drama. I get that. I just don’t think every drama episode requires equally dramatic engagement. If something truly isn’t right, by all means get in there. But if it’s something truly not that major and isolated to that particular time and place, they can probably (and should) figure it out for themselves. Most of the time girls are just looking for something, anything, to be dramatic about. Don’t get too concerned and definitely don’t try to understand it.

It’s just part of being a girl. 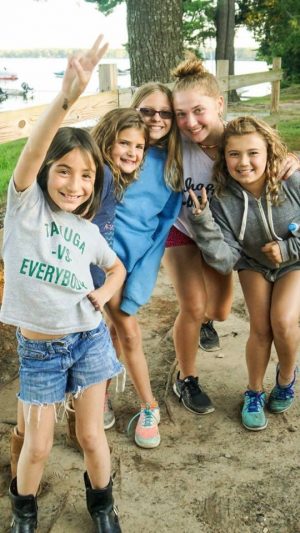 Uh Oh
The Worst Swear Word Of Them All
#Facebookforever
You Don't Have To Have Kids : Part III