The end of the school year is a crazy time of recitals, parties and graduations—and with those events come times, dates and rules. For me, it all got very overwhelming. I couldn’t get it together to the point where I was even starting to take “school announcements” personally:
ANNOUNCEMENTS

*Please send your child to school in his/her purple concert t-shirt on Tuesday, June 10th. We plan to take an end-of-year class photo! Don’t forget like you did on Field Day, ROBYN. NICE GOING, ROBYN!

*The 1st Grade End-of-Year Party will take place on Wed, June 11th from 2:00-3:30 pm. We know you don’t like to be social, ROBYN, but it would be nice if you could come and support your kid!

*Friday is a half-day, A HALF DAY MEANS “HALF,“ ROBYN. Students will be dismissed at 12:05. Please do not forget to pick up your kid, again, ROBYN.

Clearly, I was losing it. Plus, I was being pummeled daily with bad news. It was raining bad news. I needed a break, from everything—and when that happens, there is only one thing to do:

I actually remembered to send the school an email that F (the 1st grader) would not be attending school on Skip Day. JJ, the 4 year old, didn’t have school that day, but I told her she did so she could also feel like a school skipping bad ass.

The beginning of Skip Day, for the girls, was a lazy morning of TV and dress-up while I did all the stuff that moms do and don’t get paid for, like cleaning. (I can pretty much guarantee I’m not the reason for the dried up grapes underneath the dishwasher.)

About 10 minutes before I wanted to leave, I gave my kids the “heads up” to clean up their crap, and of course they didn’t. I took that opportunity to remind them of the last time they didn’t do what Mommy asked, and they did.

My plan was to take them to lunch at one of our favorite quick places, but we couldn’t get to lunch because EVERY freakin’ parking space was taken up. I even went to the parking garage, which I hate, because I always get lost. This time, maybe because my mind was on food, (I still don’t know how) I validated my ticket, exited the parking garage, and totally forgot to park.

And then we almost got into a huge accident. HUGE. I didn’t even see it coming. Some idiot came out of nowhere and decided the big, red STOP sign was not meant for him. I slammed on my brakes and I was shaking all over. It scared the crap out of me.

“Mommy! Tell her to stop hitting me!”

“SHE just punched ME in the face, Mommy!”

“Hello?!?? We almost just DIED! Well maybe not you guys, you probably would have been fine, but for sure me. MOMMY!! MOMMY GONE. …No one cares.”

“We care! How is Daddy going to find out so he can come get us?”

MOMMY IS DEAD and still, all they care about is Daddy.

We ended up at a burger place, a really good burger place: totally old-school, dark and sinister while, at the same time, very welcoming. Plus, it’s got a bar. A good bar. I’m not a drinker, but my dad was, so my brother and I often sat at the bar with him when we were kids.

Sitting at the bar with little kids is like putting flamingos in the elephant cage. They don’t belong, but they brighten up the place. Plus, they’re not going to ruin the vibe. You know why? Because kids don’t care. Kids only care about themselves so when the guy next to us slipped his wedding ring into his pocket (I totally saw him!) as a hot, blonde took the stool next to him, JJ didn‘t care, she was too busy whining that that her sister “got more chair-wees in her Shirley Temple!”

That’s when it hit me. It was time to ignore Wedding Ring Guy because I had quite the opportunity in front of me:

Whenever we are at a restaurant, my kids look to me when they need something. But here’s the thing: I DON’T WORK THERE. I need them to start asking someone who works at the establishment for whatever it is that they need. And who’s the best person to start with? The bartender.

Unless your kid asks for Scotch, the bartender is not going to say “No.“ If he does, he’s like the WORST bartender EVER, but I don’t think are many bad bartenders. (Except me, I was terrible.)

If JJ wanted more “chair-wees,” she was going to have to ask for them herself. Once F saw that it worked for JJ, she also started asking for stuff—and not just cherries, but oranges and “little swords” too. They had that bartender wrapped! He would have let them flood the top of the bar and turn it into a Slip and Slide if that’s what they wanted.

And the girls, I couldn’t get them above a whisper when we first got there, but by the time we were ready to leave, they were playing Chicken on the barstools fighting over who got to the pay the check.

Next up: The library. NO THANKS, yo. Not on Skip Day! We went to the toy store.

We went to a good toy where the toys are good, but good toys are not cheap. I had gift cards though! Two of them! One was only a year old but the other one, no joke, was six years old. What are my chances? They’re a pretty successful store—if I hadn’t been there in six years, clearly they didn’t need me.

But, they took them! They took both cards. I could feel Skip Day taking over and my luck beginning to change. For the first time in what seemed like awhile, I caught a break. Was the toy store the turning point? I don’t know, but I do know that I hardly ever buy my kids stuff just for the heck of it (I’m all about “earning” everything) so there’s a distinct possibility that my kids simultaneously crapped their pants when I held up my arms and said “GO CRAZY!!”

It was so great. I felt like such a shooter, but really I’m not. The people who got us the gift cards are. (Thanks! Can we get two more?) 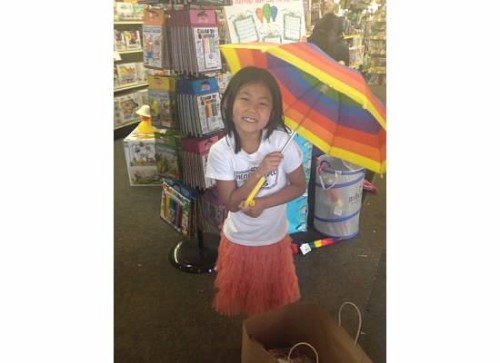 (We got this and we’re calling it our Gay Pride Umbrella.)

The girls love Slurpees (probably because their dad does). And if you want a Slurpee, you’re going to 7-11, so that‘s where we went. It soon became very clear to pretty much everyone in the store that I am not super familiar with Slurpees. I was struggling with the machines, and my kids were driving me nuts. Every flavor I gave them, they would take one sip only to declare it “yucky.”

I asked the girl at the register if she wanted me to pay for all the Slurpees because even though my kids were only getting one each, I had eight (maybe nine) Slurpee casualties. I was scared if I didn’t mention them, the bad karma would come back and our new rainbow umbrella wouldn’t be able to protect us.

Thankfully, she was really nice and told me we didn’t have to pay for them. Also, she looked like a meth head.

Meth heads FREAK me out, but I’m obsessed with them. Their teeth and stuff, so gross. I had to tell someone so I texted my girlfriend,”Busy.”

—OMG, I think I for real just saw a real live meth head. I’m not kidding.

—Really? Do we know her?

We did not, but she was serious. And I laughed really hard because sometimes what you need is one good laugh and one really good Skip Day to remind you that even though things are completely and totally out of control, it’s almost summer, and it’s all going to be OK.

Thank you so much for being here!

First Words
"That's Not Your REAL Kid"
The Lesser Tiger Mom
The Thing About Play Dates...