Everyone is teasing me lately, and I don’t like it one bit.
I was out for dinner recently and when the server went over the specials, I picked one that sounded dee-lish. I was very excited for my dinner because I look forward to my feeding time much in the same way a hippo does. When the server came back to my table, she told me that she was very sorry but they were out of what I wanted. What? Wait. What? You’re out of what I wanted? Um, how about, I don’t know, how about maybe taking it OFF YOUR LIST OF SPECIALS?
When I told the youngest Front Boys’ cabin (B-2) that I would come by during Rest Hour to play some cards and partake in a little candy eating, they told me that they didn‘t know too many games besides “War.” War? Really? I don‘t think so. That game sucks. I told them that I’d bring four of the older boys from the Back Boys’ cabins to teach them a really fun, legendary Camp game called Squares. I found four very cool older boys at dinner that night and they were totally into it. (Damn right they were into it, I did it for them when they were little and it’s time to pay the piper). The older boys got the “OK” from one of their counselors and then asked me if I was going to pick them up. I laughed hard.
Are you joking? Pick you up? Hell to the NO. I’m not going there. 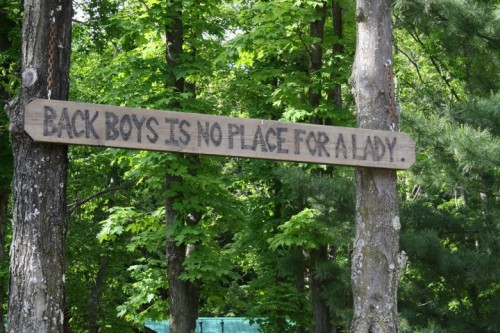 Meet me at the B-2 cabin. Rest Hour. Tomorrow. Be there.
They were pumped, but did they meet me? No, they did not. TEASE.

I ran into six campers that I adore in our camp Store earlier today. They used to be in Front Boys when they were younger and now they are in Back Boys. Knowing how I feel about going to Back Boys, do you think I will be spending much quality time with them? They were sad too. All of the sudden it was like I stepped into an 80’s movie montage of memories: Euchre, tootsie pops, me telling them that their cabin is stinky and yelling at them about how wearing the same shirt over and over is not cool, but rather quite disgusting…that kind of stuff. We shared a laugh and a hug and we all swore that we’d still hang, but the moment I turned around I knew it would never be the same. Then, as I started walking away, one of the campers called out:

Don’t worry, Robyn, we’re just in Back Boys for first session. We’ll be back in Front Boys for second session and then we can all hang out again!

Could it be? Would they be back up in Front Boys for second session? I was very excited about the prospect of getting some of my boys back, but when I asked my husband (one of the camp directors) about it that night he just looked at me like What are you talking about? Why are you listening to the campers?

But the straw, the straw was this: I was looking through People, Style Watch magazine and I saw a dress that I had to have. I was very excited about how cute I planned on looking in my new dress. I Flo Jo’d it to my computer and went to the website listed under the dress in the magazine. Would you believe that the site is  just a showcase for the store items? You have to physically go to the actual store to buy the dress which is exactly what I would do IF THERE WAS A STORE SOMEWHERE AROUND HERE!

I mean, Come ON. Cease the Tease!