It’s “Mailbag Monday!” Below are some of the topics/questions that were sent in and up for discussion this week. Feel free to agree, disagree, add on, whatever you want. Here we go:

–When did all of this anti-Semitism begin?

Anti-Semitism (hatred of Jewish people) started forever ago, but I’m sure the person asking the question is referring to the current wave sweeping through parts of Europe. I’m not sure if what’s happening (violence, threats, hate speech) is because a bunch Jew hating losers are using the Hamas-Israeli war as a platform to be open and violent about their hatred, or maybe it’s a bunch of new dumb asses who are looking for people to hate and following someone else’s lead…?

Either way, there is some crazy stuff happening there. The NY Times reported that a rabbi in Frankfurt, Germany got a phone call saying that if any of the caller’s family in Gaza was harmed, 30 Frankfurt Jews would be killed.

WHAT? How in the hell is a rabbi in Germany supposed to control whether the caller’s people will or will not be harmed? That’s just insane and, quite frankly, a lot of responsibility to put on one person. What kind of phone call is that ANYWAY?? I don’t care what religion you are, getting a phone call like that is just not right.

–If you saw a kid acting up and being really loud in a restaurant, would you do something or would you just ignore it?

CAN you ignore it? Is it “ignorable” or is it ruining your dining experience? If I’m out with my friends or family and we’re in a restaurant and some kid going bat s**t crazy, I’ll give the parent the benefit of the doubt (the parent is entitled to figure out a good strategy to end the madness) but, honestly, if it’s going on for a long time, then yes, I probably will do something. I can’t help it. I can’t deal with all that craziness while I’m trying to eat and if the parent is not doing anything to diffuse the situation, well that’s not fair to anyone in the restaurant.

I already had kids that age so I get it, I was there—and I still say take care of your kid, DO SOMETHING, especially if it’s a kid who’s at an age where he can be reasoned with. Sorry mommy, but I’m paying to be here. Why should I spend my hard-earned money on a front row seat to your kid’s meltdown? I’m here to eat; I don’t even know your kid.

But there is a good chance that I will get to meet him because if he doesn’t shut it soon, I’m going to your table and in a really high-pitched voice that kids and dogs love I will say “What’s going on, little man?? What’s wrong?” and the kid will be like “Who the hell is THIS lady???” and I will start asking a bunch of questions about why he’s so upset, then I’ll commiserate with him and spew a whole bunch of crap like “I know, little man. It’s all going to be OK,”  and then…it’s the craziest thing ever…but he stops. He stops!!

Sometimes a “new person” is all the kid needs to shut him up. Parents become white noise to kids after awhile so even if the parent is doing and saying all the right things, the kid is not listening or caring.

But a different person? A different voice? That can totally baffle a kid and, in the end, it all works out because the meltdown is over, the mom is done stressing, and I can get back to stuffing my face.

Anyway, the 5 year old, she loves her gynie. She plays it like it’s a guitar. She will take a huge leap half way across the room, land on her feet and start playing her gynie like she’s Pete Townsend. Then she’ll butt up against her 7 year old sister and start rubbing her tushie on her. The 7 year old is all “Quit rubbing me with your gynie and your tushie!!” But she doesn’t quit. She just switches sides.

That’s where my kids are right now. They may get to a place in their lives when they start “experimenting” with themselves, and that’s cool. I don’t know exactly what I will do because I‘m not there yet, but I will probably just tell them to be discreet, and when they’re done, to wash their hands (with soap) really well. 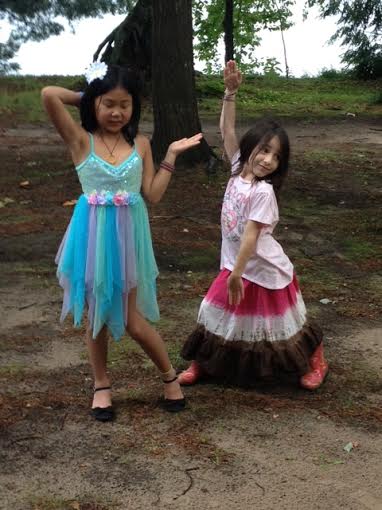 You can send in “Mailbag Monday” questions or topics anytime to robyn@dimsumanddoughnuts.com or any of the links below. Thank you so much for being here!