Scamming, if you’re not familiar, is a lot like lying but it’s done in a way that isn’t as obvious, or at least it’s not meant to be. F scams quite a bit, so I’m sure she gets away with it here and there (law of averages), but I do catch her a lot. Sometimes I’ll blow her cover on the spot and sometimes I’ll act clueless—and bust her later just to mess with her.

Like this one time, we were at a friend’s house and F had to go to the bathroom. As usual, I yelled “Wash your hands!!” when she was on her way because if I’m not physically IN THE BATHROOM with her, she’ll for sure scam her way out of the washing part—which is exactly what she did.

How did I know? Because when I went to the bathroom to wash my hands, I noticed that the only hand towel in the trash was mine, and there wasn’t an alternative towel option.

If you’re going to scam, at least be good at it.

I didn’t say anything during our visit, but when we were in the car, settled and discussing our fun time, I threw out a “Hey F, when you went to the bathroom, did you wash your hands?” And she said “Yes” and I said “That’s a lie.“

She was incredulous. “What?!? Mommy!! HOW DID YOU KNOW??” And I simply said “Because I’m your mom.” (And then my friend who was in the passenger seat gave me a look that said “How DID you know?“)

But the answer is the same.

Let’s face it, if I wasn’t her mom, why would I care? What do I care if some kid does or doesn’t wash his hands after peeing? He’s not my problem, as long as he doesn’t touch me with his pee-filled hands.

F is very busy. I understand that. And washing your hands is kind of a pain. It’s not even the fact that she doesn‘t always wash that bugs me (it‘s gross, yes, but not my biggest problem), it’s the scamming.

She scams a lot. She’s “Scamerella.” If she’s only allowed one piece of candy, and she doesn’t think I saw her take the first piece, she will roll the dice and go for another? It’s worth a shot, right? With some people, yes. They don’t know of her ways—they’d never suspect an “SIP” (Scam In Progress).

But the other night, she did it again.

As part of F’s 2nd grade homework, she has to hand in four word activities every Friday. She told me that she did all four of them. I knew she didn’t. I gave her a few chances to come clean but she continued to made up all kinds of stuff until I busted her. She had an answer for everything. It was extremely aggravating and all she succeeded in was wasting time.

I got her good though.

I didn’t make her do the fourth activity. Instead, I made her write an apology letter—not to me, to her teacher—and I told her what to write. F wasn’t happy. F LOVES her teacher and she doesn’t want her teacher to think badly of her. She even went so far as to plead “But, mommy, I don’t scam in class!” (Oh, that’s nice! So it’s just me that you scam? NOT ANYMORE, SISTER!!)

This was the letter:

I know that we are supposed to do four activities. I only did three but I told my mom that I did four. I lied. My mom wants me to “own” it. I’m sorry.

The “I’m sorry” part of the letter was all F. She put that in all by herself. That made me happy because as far as her teacher is concerned, she really is sorry.

And who knows? Maybe a little bit of that “I’m sorry” is for me. 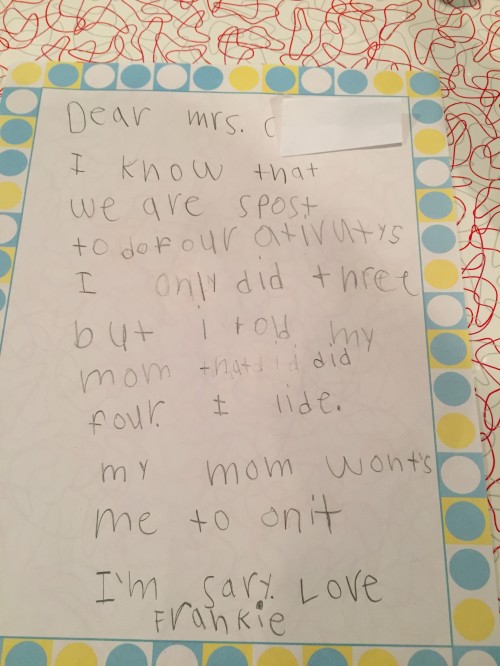 Thanks for being here!!

For more Dim Sum and Doughnuts, check out the following pages:

Why Are My Kids Spoiled Brats?
Uh Oh
How To Bribe Your Kid
You're Not Alone (VII)