When I was a kid, my dad once told me that there are many, many people who don’t like Jews. I didn’t understand. Where I grew up, it seemed like everyone liked Jews. It was harmonious. It was happy. I don’t remember one minute of anti-Semitism. But the world outside of my suburban incubator, that’s the world my dad was talking about—and out there, there are a lot of people that don’t like Jews.

What did we ever do?

We’re just minding our business. We’re not bothering anyone. The only ones we’re really bothering are each other.

I’m familiar with the stereotypes, and yes, there may be some truth in stereotypes, but honestly, I feel like some of the ones pertaining to the Jews are blown just a little out of proportion.

–The Jewish mother that inflicts guilt. OK, yes, but that’s not just us. Jewish mothers, admittedly, seem to have perfected it, but I don’t think you have to be Jewish to be good at dishing out  guilt. I think guilt is just part of being a mom. Although, who knows? Maybe guilt is embedded in our Jewish DNA because as I write this, my 4-year-old is walking around our house, saying to no one in particular: “What am I, chopped liver?”

Jewish men are nerdy guys who can’t fix anything. There might be a little something to the “can’t fix anything” part, but so what? Is that a reason to hate us? And besides,we’re not pushing our nerds on anyone, they’re our problem. (Well, not mine—I found one with a tool set.) 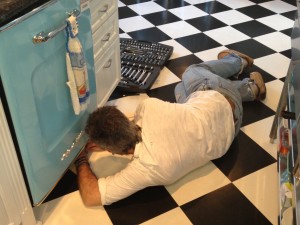 –Jewish women are princesses and they are pushy. OK, that one might be a winner. But the princesses we boast are only making the world a prettier place, (especially if they wear crowns) and I take offense to being stereotyped as pushy, even though, I, a little bit, can be. But only sometimes.

–Jews are cheap. That’s another big one, maybe even the front-runner. My grandfather and my uncle were both in the clothing business so my mom grew up in that world. She used to always tell me that it’s “silly to pay retail.” So, because of her, and her side of the family, I prefer not to pay retail if I don’t have to. I mean, I’m not in the middle of the produce department haggling over the price of bananas, I’m not standing in the middle of a department store asking for a better deal on a blush brush—but if I’m shopping and there is a sales rack, I try to get something from that area. Does that really make me cheap, or does it make me a super awesome shopper?

And not to point fingers, but Shakespeare hasn’t done a lot to help us. Remember that play The Merchant of Venice? No? Well, there was this one character, the Shylock, and he was the Jewish moneylender. He was also a villain as big (and as crooked) as his nose.

Thanks, SHAKESPEARE! Not only were you perpetuating a horrible and ugly stereotype, but you also preserved it forever on paper. Thanks, A LOT.

I have no idea how or when the negative Jew rumors started. I guess at some point, a long time ago, a Jewish person pissed the wrong person off, that person spread it around, and we haven’t been able to live it down since. But it’s been like this for so long.

When will it stop?

Just this morning, I was reminded of how much the Jews were persecuted in the past:

Me: Put away your toys!

4-year-old: Mommy, you are treating me like a Jew.

If memory serves, I think King Pharaoh was forcing the children of Israel to build cities and construct roads—I don’t think he was asking them to PICK UP THEIR TOYS, but it’s nice that she has some education on the subject. It’s important for her to know that the Jews of yesterday went through a lot, A LOT, in order to made things better for us today.

The hatred may not be as accepted, or as ubiquitous as it used to be, but for many, it’s still a motivator. There are still so many people who cling to not liking Jews. They don’t want to like Jews. It’s like they NEED to not like Jews. But I think if they actually knew some good Jewish people, they might feel differently.

It would be so nice if the haters took a day off from making Jews out to be deplorable people and, instead, embraced what we (not me) have brought to the table:

How about a corned beef or pastrami sandwich on rye? Maybe some chicken noodle soup while you’re watching re-runs of Seinfeld? Lipstick, jeans and the remote control? Color TV, contraceptives and valium (yeah, valium). Where do you think all of that came from?

Jewish people aren’t so bad. And if you still think we are, trust me, we could be a lot worse: We don’t complain that we lost our MVP when he started his own religion (which seems to be doing really well last time I checked). We’re not out car jacking, shooting up malls or robbing your house. We’re just doing our thing, saving for a home in Boca and trying to figure out what we want to eat for our next meal.

Don’t let a few distorted stereotypes turn you off, and please, don’t let losers like David Berkowitz (he was actually a Satanist, but he was born a Jew so now we’re stuck with him) and Bernie Madoff… (another loser—I want him off our list too) ruin it for the rest of us.

Some of us are good and some of us aren’t. We’re the same as any other culture or religion in that way. All the bad stuff you hear though? Most of it is just hype and exaggeration. As a whole, most Jewish people have good hearts. You have no where to go for the holidays, or for dinner? We’ll invite you over, you’ll eat ’til you barf, and we’ll send you home with leftovers. GOOD leftovers. Babka, blintzes and sprinkle cookies.

Plus, everyone knows it’s not a good idea to cut off your nose to spite your face…no matter how big it might be.