What’s so ironic about Dim Sum and Doughnuts is that I’m writing it so my girls have something of “me” when they get older, but, at the same time, I never have any time to write in it because I’m so busy with them.

Right now, they are at swim lessons with Cody (my husband), so it looks like I have a few hours of free time on my hands. Yay for me! There is a part of me that wishes I was at swim lessons too (I hate missing out on stuff) but pools kind of gross me out—especially indoor pools. They smell funky, they’re full of chemicals and seriously…why don’t you just pee ON me? I know everyone in the pool is peeing in it. I know they are.

So, because of that, Cody goes to swim lessons.

Anyway, I was at lunch the other day with my girlfriend, Caren, and we somehow started discussing a topic that I want to make sure I touch on for my girls. We were discussing how hard it is to just accept people for who they are even though we know it’s the right thing to do and, in the end, it’s so much easier.

Why do we continually expect others to live up to who and what we want them to be? Who are we to expect anything of anyone?

Yes, I expect a lot out of my husband, but he‘s my husband. We’re married. How are we supposed to stay married (happily) if we don’t deal with our stuff? We have stuff. All couples have stuff. The trick is to stay on top of the stuff so it doesn’t pile up. When I notice new stuff—bad stuff—I bring it up and out. I don’t let that stuff go. I want us to stay married and if I can‘t bring our stuff to the surface so we can address it, that is just not going to be good for us. I’m sure it’s exhausting for Cody that I always have to address our stuff, but too bad, Cody. TOO BAD-SO SAD!

And my kids. Yes, I’m hard on my kids. That‘s not news…I’ve said it before. I’m probably the mom other people talk about because I’m so hard on my kids (among other things). I don’t give a crap. They’re good kids, and I’m a good person. Yes, of course, all three of us suck sometimes but, on balance, we do OK.

But other than my husband, my kids and myself—who am I to expect anything from anyone?

People are who they are, and they do what they can do.

For the most part, I’m good with that. I’m busy. I have things to do. If you let me down, I move on. But sometimes, just sometimes, I get disappointed in someone.

Thankfully it doesn’t happen a lot because let me tell you, it’s a hard way to live.

Walking around… all dark and disappointed…

Friends, family, co-workers…someone is going to let you down. It’s going to happen. But so what? We don’t need to get all twisted up about it. Plus, most of the time— it’s nothing personal. Most of the time the person who isn’t living up to our expectations doesn’t even know it. They’re just living to their capacity level and we’re the idiots for expecting more from them. We should know better!

The people in our lives, they aren’t malicious by nature (or we wouldn’t have them in our lives). Some just aren‘t built to live up to all of our expectations. And that’s OK…or at least it should be.

So, why is it that sometimes it’s so hard to move on from disappointment?

But we should, because harboring a grudge or disappointment is just so toxic and there’s really no percentage in it.

If we learn to accept people for who they are, we won’t be disappointed. If we love them for the good stuff they bring to the table—and we know (and accept) their limits—we can‘t get hurt. We’re happy when they show, and not surprised when they don’t.

And that’s pretty much it.

And also, they’re home from swimming. 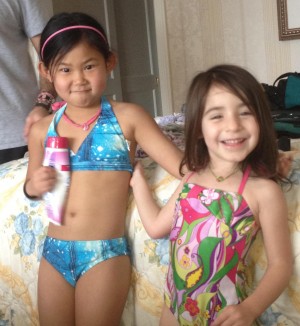