I used to have a Golden Retriever named Barney. He was not our family dog; he was my dog. He was named after the store in New York City. Barney was very handsome and very regal–and he carried himself as such. He wore a Burberry collar, he stayed clear of lake water and he made me blow dry his fur if he got caught in the rain. Barney was my guy throughout my single years and when he died (the night before I got married) it broke my heart.

A month after our wedding, my husband (Cody) and I adopted Floyd Coden. We found him at a Golden Retriever foster home. We were taken with his big head, stubby tail and kind eyes. We didn’t know he was completely out of his mind.

Floyd Coden chases cars like he’s in a video game. He’s the first to jump in the water and he will roll in anything–he doesn’t care whose ass it came from. When I feed him, he eats like he just got out of prison and if it’s thundering out, he will rip down an entire door frame. Floyd Coden is nothing like Barney. He is, however, the cutest dog ever (that’s what it says on his dog tag) and I don’t know of a sweeter dog anywhere.

My girls are lucky to be growing up with Floyd Coden. He’s big, but he’s harmless. He’s by their side if they’re crying and under their feet when they’re eating. I have always said that Floyd Coden is the best dog for your kid to meet if your kid is scared of dogs. If you’re still unsure, don’t come over. Just kidding. You can come over. You even can ask me to put Floyd Coden away, and I’ll do it because you’re the guest, but I won’t be happy about it–and neither will he.

If your kid is scared of dogs, I’m not suggesting that you take her to a dog park and leave her with the dogs as you run away pointing and sticking out your tongue. I’m just saying it’s a good idea to help abate her fears. Maybe think of someone you know who has an awesome dog (like mine) and go visit that person (but not me, unless you know me–I’m not running a petting zoo over here). Go and hang with the dog. Walk your kid in slowly and have her put her hand out so the dog can sniff it. Keep her hands down though. No one is “under arrest” and dogs sometimes jump when little kids hold their hands up high. A love affair might not emerge from the first date, but it’s better than avoiding the issue all together. You gotta start somewhere, right?

Floyd Coden is our poochini. He’s our poochikins (Cody hates when I call him that, so I say it all the time when he’s around). I love Floyd Coden like he’s my child so I have no problem admitting that I’m on a high horse when it comes to him. I’m going to get down and not just because you’re done with me—but because if Floyd Coden were to see me, he’d probably hump the horse. 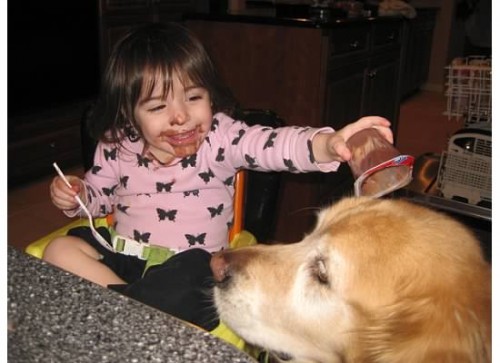 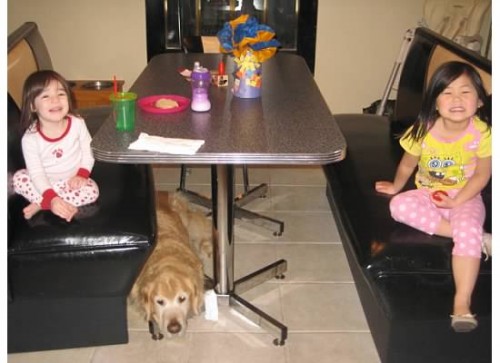