My daughter, F, is in first grade. She gets tested weekly on “Dolch Words.” (I don’t know why they’re called “Dolch Words,” they seem like “Spelling Words” to me.) We are supposed to work on these words every day. We do not. But when we do…I have noticed that she does this when I give her a word to spell: 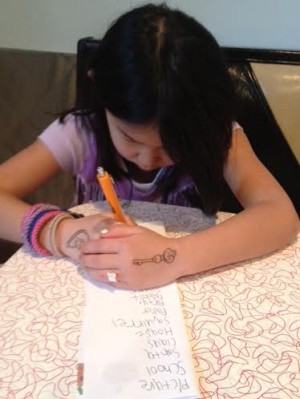 It’s weird that she‘s doing that though, right? Or is it? I mean 1st grade seems a little young to be covering your work, but in a way, she’s also setting the stage for later. It’s like she’s taking a preemptive strike against cheaters. She’s ready for them, whether she needs to be or not.

And who can blame her? She’s right. Screw that kid who stayed up all night slamming juice boxes. He should have been doing his Dolch Words! That kid doesn’t get to come in and copy off my kid. That kid is a slacker—a slacker AND a cheater.

I was a slacker and a cheater.

It was in college: Sophmore year. I don’t think I would have made it through my Anthropology class without cheating. And the ironic part—guess who I cheated off of? Yep! The Asian kid. Not only am I a cheater, but I’m also a racial profiler, who now has a daughter from China.

I would say that on most every aspect of her life, F is in better shape than she would have been if she stayed in China. The area where she is from, it was not good. It was real rural China. All I remember is mud. And huts. And more mud.  The part of Fengdu, China that we saw was not, by any means, a tourist destination. It seems like one of those areas where the children grow up working in sweat shops. But I don’t know for sure. Either way, it made me sad.

We weren’t there for long though. We drove 3 hours from the hotel to the orphanage and then we drove 3 hours back. I only know what I saw on the bus ride, and it was rough. Other than that, I don’t know a lot. I just know that I’m glad she is here and not there.

F has a good life. She may not have everything she wants, but she has everything she needs. I do believe she would have had all of the necessities if she were still in China, but the extras—the opportunities and non-essentials, I can’t see that those things would have been accessible or plentiful there.

That’s not to say F’s biological parents weren’t probably very lovely people. I have never met them, but I like to believe they were hard-working, good people. Sadly, they were faced with a horribly difficult and painful decision and they did what they thought would best serve their daughter—because they were good parents.

And so are we. We are providing for our daughter, the daughter they gave us, as best we can— and sure enough, she is a happy, well adjusted, self-confident, beautiful child.

There is only one thing we might be coming up short on though.

F might not end up being as smart as she could be. She’ll be normal smart, I mean Cody (my husband) and I aren’t idiots and we’re not standing next to her with a vacuum on her brain—but being placed with us, chances are good that she might not live up to her full intellectual potential.

I think we jinxed ourselves. When we used to tell people we were adopting from China, ninety percent of them would respond with some variation of “She’s going to be so smart!” Seriously, almost everyone said it. I don’t even know if we should have been offended or not. We were just like: “Smart? Great! Less work for us!”

But, still—raising smart children is work and my huz and I probably (definitely) don’t do as much as we should. Like right now, I should probably be doing something productive with my kids because my 4 year old is running around, pulling down her pajamas and showing me her gynie, yelling that her gynie is a “GUITAR!!!” and do I want to watch her strum it? (No, I don’t) …and F is yelling that she wants to play “Restaurant,” and if her sister doesn’t play with her, she won’t be her sister anymore.

When we first got F, she was 11 months old. She was in China for almost the whole first year of her life. Still, she caught up to other kids her age very quickly. She had never heard the English language before meeting us, but by the age of 18 months, not only did she catch up, but she was blowing kids away right and left. There wasn’t a mom anywhere who wanted to play “Guess what my daughter is doing?” because my kid would have smoked her.

Somewhere, somehow though, something went awry.

We didn’t get the sweet, shy Asian kid we kept hearing about. We got the kid who, during a nice, family dinner last night, flat-out leaned over, looked me square in the face, lifted her leg and RIPPED one, a LOUD ONE, at the table. 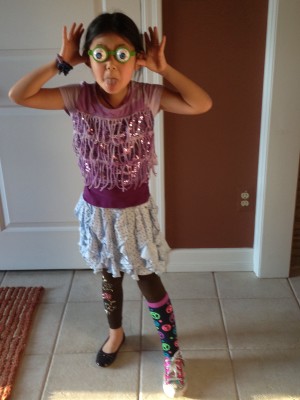 And we were told she was going to be SO smart, but, thanks to our slacker ways, I don’t know how smart she’s going to be. In other words, if someone decides to cheat off her one day, HAHA! Joke’s on them! You thought because she was Asian that she’d be SO smart, but little did you know, she was adopted by two dummies, so she‘s not super smart, she’s only regular smart. Sorry, pal! Enjoy your C+!

But if the day comes when she’s not paying attention, and she uncovers her work and lowers her guard—and someone cheats off her, or even worse, ON her, this is my hope:

I hope she lets it go. 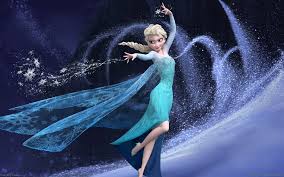 I know cheating is wrong. I was wrong to cheat in that Anthropology class. But if she were to tell me that someone was cheating off her, I’d still say “Let it go.”

Who cares? Chances are the cheater is going to end up exactly where he or she should end up in life. That’s what happens to cheaters.

I knew this one lady once, her husband cheated on her. He cheated on her with a friend and then he married the friend and had a whole new family. He was still good to his original kids, but he was done with the original wife. I’m not saying it doesn’t suck to get dumped. It does. But at some point, it’s time to move on. This lady, she never moved on, and all of her anger and bitterness wasn’t going to make things go back to the way they were.

If anything, it made things worse.

But she never got over it and instead she got cancer. I’m not saying the two things are related but, I think they kind of are. Bitterness. That stuff will eat you up if you let it. It might even make you sick. I don’t know FOR SURE, but do you really want to chance it?

The one who cheated off you in class or cheated on you in a relationship, that person is CLEARLY not preoccupied with thoughts of you. Whey are you giving them your time? As my dad would say, “What’s the percentage in THAT?”

And that’s just what I am going to tell my daughter.

That’s what I’m telling her because even though I may not be the smartest person out there, I’m still a little smarter than she is.

What Are You Going To Do?
Not Everybody Is Going To Like You
When You're Feeling Left Out
Self Reliance