One night during the summer of 2013, Chase Perlman asked to hang in our cabin with my girls and our nanny, El, while I was at Evening Program. When I came back to check on things, I expected them to be fighting to get my girls into bed, but both girls were tucked away and Chase Perlman and El were on the couch doing stuff on their phones. I have no idea what they were doing, but it looked like they were communicating with other people which confused me because I thought they wanted to hang out together.

I’m sure it’s a generational thing and if I had grown up in that generation I probably would have been the same way, but it’s still odd to me that people can be together yet NOT be together.

What does it mean?

Are people simply multitasking or are they not sufficiently entertained?

If they are multitasking, I get it. These days, most of us have to do that. I know when I meet friends for lunch, I leave my phone on the table in case an emergency comes up, but if I’m with you, I’m with you. I’m not scrolling through Instagram pics while you’re talking and I’m not starting text conversations with someone else—and if someone is preoccupied on their phone instead of hanging with me, I probably shouldn’t take it personally, but I do.

I think I’m pretty entertaining. I don’t know why someone would have to keep checking their phone while they’re with me. Is it the whole FOMO (Fear Of Missing Out) thing I keep hearing about, or maybe I’m just not as enthralling as I think I am.

I didn’t grow up with Smart Phones and Tablets, but even if I did, I still think I’d think it rude to utilize them during time spent with someone else—because even though technology changes daily, good manners don’t.

Clearly, I just don’t get it. What are people doing on their phones when they’re with other people? Are they texting more people? Why aren’t they with those people?

Of course I understand the need to get back to someone real quick, or even show something hilarious to the person you’re with, but for everyone to be doing separate things on their phone while they’re all sitting together…? I don’t get that at all. But I see it, a lot, and not just from Chase Perlman.

But he’s the one I started razzing about it. And I’m driving him nuts, but he’s so good about humoring me!

After the cabin incident, EVERY SINGLE TIME I saw Chase Perlman around camp with his phone, (which he shouldn’t have around camp anyway!!) I would yell “CHASE PERLMAN!!!” as loud as I could to which he would stop, look around, see ME and grunt audibly. Then he would (reluctantly) put his phone away, at least for the moment.

But not everyone does. It’s the new normal to stay connected, but all the time?? —No matter where you are, what you’re doing or who you’re with? That’s a lot. And it’s not just me who feels this way. Once my girls (then 4 and 6) found out how badly I was terrorizing Chase Perlman, they got on board—and not just with him, with me too.

But my girls were right, to an extent. My attention should go to them when we are together, but they also need to know that sometimes work things come up, so we came to an agreement: I will always let them know when I’m getting back to someone for work, and they will know that they need to SHUT IT.

When we sit down to eat (whether we are home or out) it’s “No Phone Zone” time. Not only no phones, but no iPods, iPads, TV—NO NOTHING with a Power button. It’s family time, yo. Emergencies only. And someone better be dead or dying because if you reach for your phone and it’s not an emergency, yeah, you know it…”CHASE PERLMAN!!!!!”

So I kept my mouth shut, but both my girlfriend and I were annoyed with the volume of the game and the parents not even attempting to offer a viable alternative like…I don’t know…maybe hanging with grandma…?

But I don’t know. It could just be me. All I know is I’m trying harder to be more conscious of looking at the person I’m with and not an electronic device when we’re talking. But I also don’t have a choice. My girls will yell “CHASE PERLMAN!!” and bust me wide open if I don’t.

And if you’re ever with us and pull out your phone at the wrong time, you might get it too. 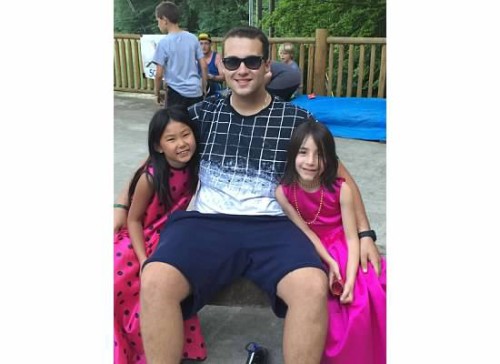 Chase Perlman with the divas.

(Yes, I used his real name, but I got permission.)

Zero Tolerance For Zero Tolerance
If Lady Gaga Had Been A Camper
Rubber Gloves
You Don't Have To Have Kids : Part III