The sucky part about almost anything is the wait: Waiting in line, waiting your turn, waiting to get served. All of it. Sucks. Sometimes the wait isn’t that bad, but that’s usually for something that isn’t that good. But if it’s something good, like really good, there’s usually a wait.

Having a baby is one of those things. Even if you get knocked up the same day you decide you try, you’re still waiting for D-Day. And most people don’t get preg the day they decide to try, so there’s waiting. For some, there’s A LOT of waiting.  And for others, it never happens at all.

For those who find it’s never going to happen, they have some choices:

Many people assume because I have a child who was adopted that I was infertile. I wasn’t. I was impatient.

Our original plan was to have one and then adopt one, but things don’t always go as planned.

When we first decided it was Go Time, I gave myself 3 months to get pregnant. It didn’t happen so I stepped it up. I tried fertility drugs to boost the process, but I didn’t like the drugs. They made me crazy(er).

So we changed the game and went with the sure thing: We decided to adopt first.

Normally, adoption is a last resort. I get that—and I have no judgment. Pregnancy just wasn’t for me, and on some level I always knew it wouldn’t be. It’s a lot of responsibility being pregnant. You have to watch everything that goes into your body because you are literally growing another human. It’s major.

And then, the big day finally comes, and what a super, fun-filled day that is! Labor and pain and pain and PAIN and if you’re REALLY lucky (like me), you get to have your stomach sliced open in an emergency C-section. HOORAY!!!

The adoption was much better for me. Outside of the waiting and the paperwork (and more paperwork), I was totally down with our adoption experience. Our trip to China was very special, and so were the people we met along the way—most of whom are still in our life.

I can’t speak to adopting a kid over 11 months old (because that’s how old ours was when we got her), but I’m 100% sure she doesn’t remember one second of her life before that day. As a matter of fact, she doesn’t even remember that day!

I do though. I remember everything. We were clueless idiots, staring at our new baby and her staring back like “Who the hell are YOU?” and us like “Forget THAT! What the hell did WE JUST DO?”

But here we are, 8 years later.

I’m not saying our way is the the right way, I’m just saying it’s another way.

I just never cared. I don’t know why.

Yes, it’s a little messed up that we have no medical history on our child, I will concede to that, but there’s also something nice about not knowing. I don’t concern myself with whether she’s going to have bum shoulders and I know she won’t be bugging me for a nose job.

Instead, I have passed on other things. Things more powerful than DNA—things that truly make “some” kid your kid. And these are the things that help make them the person they become.

But it’s only natural to want to have a kid of “your own.” I get that. Even I like to check out families and look for resemblance. It’s fun! People do it all the time to us too when I’m with my little one: She has your eyes! Wait! She has your husband’s eyes! And I’m all What about her teeth? Jacked! Did you get a look at those? The older one has jacked up teeth too but hers aren’t my fault.

And obviously, if you have “Prince” like talent or “Einstein” intelligence, for sure figure out a way to get knocked up because this world is always in need of greatness.

But if you’re not that great—you’re just normal great, like us—and baby making isn’t working out as planned, please take just one minute to ask yourself this:

What’s more important to you, having a baby or being a parent?

Because having a baby isn’t what makes you a parent, raising a child is. And after all the waiting is over, the child you raise is up to you. 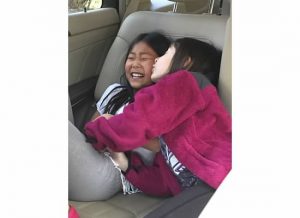 First Words
In Defense of Black Dogs: The Bruno Marshall Story
It Takes A Village (3 Parenting Tips That Might Help)
It is what it is.