As a parent there are certain, inevitable questions you need to be prepared for:

“Where do babies come from?”
“Who invented pretzels?”
And the ever popular: “Do you believe in G-D?”

JJ (my 7 year old) recently asked me the last one. ​Her question was random and had nothing at ALL to do with finding a good snack, but that’s ​how it goes.​ Kids don’t always give you prep time for hard subjects. You have to be ON and ready because kids, in a matter of seconds, have the innate ability to send everything off track.

Turns out, I do believe in G-D. I believe there is something up there (way up) that no one has any control over. It’s something we can’t explain, but we ​know i​t’​s there. G-D, to me, is uncontrollable, untouchable, and all powerful. Always around and always watching​, G-D is the ultimate decision maker ​(​x​)​ one million trillion kabillion with no rules or anyone to answer to, and the power to dispense both good and evil.

But sometimes it’s hard. There are so many horrible things that happen, sometimes it’s really just really HARD. My kids are young (7 and 9) so I’m still able to shelter them from most of the bad in the world, but sheltering them from all that’s bad isn’t always good. Because bad things happen.

Some things are SO bad though​, I’m just not ready. Example: I haven’t discussed anything going on in Syria with my kids. I haven’t brought up the fact that there are some very, very, very bad people causing unspeakable pain​ and senseless death ​to ​hundreds of thousands of ​innocent men, women and children.

How do I explain that to my kids?

I can’t. Because no matter how I spin it, it will only lead to another inevitable question: “If there are so many bad people in the world, why does G-D take the good ones?”

And I don’t have an answer for that.

I don’t know why there are a shit-ton of ​horrible people running around​​, doing horrible things​, ​all day long, all over the world​, but Hey, lemme just grab Alan Thicke over here for a second. Sorry, Al! Time’s up!!

I get that death is inevitable. I do. I’m just having some trouble wrapping my head around why so many ​bad, bad people are ​allowed to stay while good, good​ ​people ​have to go—many before they’re even ready​! …Or before we are.

When I was 27, I lost one of my most favorite boyfriends to a horrific death. We weren’t together (or even speaking) at the time, but I struggled hard. He was young and ​it was ​tragic. My dad​ ​proposed that maybe some people are taken from us early on so they can be preserved and remembered in a certain way. Buddy Holly, Amy Winehouse, Janis Joplin​, J​im Morrison: ​They were all great talents who left us in a lot of pain​.

OK, I can get on board with that, but I have another friend I lost​ (​also in our 20’s​) and he wasn’t on the path to destruction at all. He was on the path to AWE​SOME​NESS. He was doing his thing, being awesome. Smart, gorgeous, ​fun, happy, hot girlfriend, great group of friends​ and family,​ and one day he got cancer, and ​then ​he got really sick, and kept getting sicker, until he died.

Why do we have to lose THOSE people???? Are they sacrificial lambs meant to send a different kind of message? ​OK, fine—w​hat’s the message? ​Cancer doesn’t discriminate? Great​, thanks!!!

​​The G-D ​subject ​is a difficult one because G-D means something different to everyone.​ But no matter what you believe, it’s because you choose to believe. ​
​ ​
​And I choose to believe the ones we have loved and lost are enjoying their new lives, resting in peace ​or partying like it’s 1999. And if it’s the latter, they’re in luck because now they have Prince, Carrie Fisher, George Michael, Debbie Reynolds, David Bowie, Glen Frey, Leonard Cohen and Zsa Zsa with them.

And if they can’t be here with us, I’m glad they’re there with them.

Thanks for being a part of our 2016. We hope you guys all have a happy, healthy New Year. 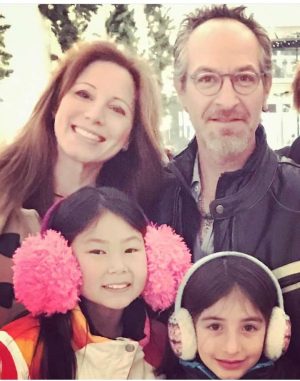