There are moments when I look at my girls and I’m so proud of them. Those moments are prized and precious. As parents, we don’t get paid for the job we do, our payment is the product. And the product is the kid.

That’s parenthood. It’s unstable, unpredictable and, often times, thankless. It doesn’t suck all the time, obviously—or no one would do it, but it’s not an easy job to raise a good kid. And if you’re a good parent, raising a good kid, you can’t ever get too cocky because as soon as you do, your kid will do something to remind you that you still have a lot of work to do.

For example, my little one, JJ, lost her tooth the other day and the tooth fairy (Penelope) brought her a dollar, a lipstick pen and a Kit Kat. (I don’t know if Penelope is a high rent tooth fairy or if she is low rent, but that’s what my kid got.) JJ was thrilled. 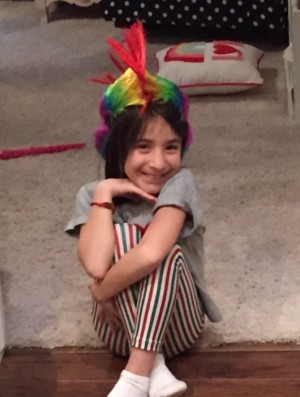 Her older sister, however, was not.

As soon as the Tooth Fairy treasures were displayed, the older one came into the kitchen whining and complaining that “JJ got a Kit Kat and I didn’t, and now JJ will get to have it after lunch and I don’t get ANYHING!! (Whine, whine, whine…cry a little bit and stomp out.)

How JJ’s Tooth Fairy haul was even ABOUT her, I don’t know.

I was so completely dumbfounded by the pre-pre-pre menstrual situation that just occurred, I called her back to the kitchen so I could calmly explain that she also gets stuff from Penelope when she loses a tooth, and she doesn’t always share those things with her little sister.

That should have been enough, but it wasn’t. There was arguing—unnecessary and exhausting arguing.

I started to get aggravated as she argued with me and I finally defaulted to asking her what, if anything, in her life she was missing…?

I will tell you what she’s missing: Nothing. But she argued that too. She somehow even managed to bring the argument back to her sister and then started complaining about a bunch of other random stuff that had nothing to do with ANYTHING in this world.

At that point, I was done so I explained that NONE of this was my problem and if she wanted some of the Kit Kat, her best move would be to go to her sister and ask HER!

It seems, as of late, that this kind of thing has become a trend in our house: My kids concentrate more on what they DON’T have instead of what they DO have.

It never lasts more than a few seconds, but it annoys me. My kids have a good life—the exact life my huz and I work for them to have and want them to have—but sometimes I wonder if we are giving them too much? They complain and whine about the dumbest stuff. A little perspective would be nice sometimes.

Part of it is their age. They’re still little. They don’t know of all the bad stuff that is going on in the world, and they shouldn’t. Or should they?

There’s a part of me that wants to protect them while I still can, but I also don’t want to raise spoiled brats. There are some days when I get scared because I feel like they are going in that direction. Those are the days when I think they need to know a little more of what things could be like for them if they didn’t have parents who are as AWESOME as us.

And I didn’t stop there. We talked at length about kids who don’t have it as good as they do. Kids who get the crap beat out of them for saying stupid s**t, and kids who don’t ever get Tooth Fairy visits. I felt bad for a second because, you know, probably not the best bedtime story ever, but it seemed like I was making my point, even if it was only going to last a few seconds.

Sometimes those seconds are what helps our kids become decent adults though.

I believe there are times when we need to indulge youth and innocence, and let our kids only know happy times, but sometimes they need to know that there are worse things than not getting a Kit Kat when your sister does.

Also, telling your kid about horrible parents who beat their kids keeps the bar real low for us so we look good and get a win—even if it’s only for a few seconds.

Unfinished Business
You Don't Have To Have Kids : Part II
In Defense Of Black Dogs: The Bruno Marshall Story
4 New Games For Your Kids