During the summer, my family and I live at an overnight camp in northern Michigan. Camp is its own little world. Everything you need is at camp. You could go several weeks without ever leaving, and lots of people (campers) are fine with that. But not me. Sometimes I need to leave. I have to spend money. I’m sorry, I just do. I don’t need to spend a lot, just something. This year, I made it 3 days before I needed to get the “F” out.

I asked my kids if they wanted to go with me, but they didn’t. They never do. They never want to leave camp and even if they did, the grocery store is not a huge lure.

That’s OK. I don’t need them. I was with them for 2 months all by myself. Camp can have them. I was outtie. A trip into town takes about 15 minutes, and if I’m alone, it’s the best 15 minutes of my life.

There are no traffic lights and one stop sign. You can go 55-60 mph pretty much the whole way, LEGALLY. I was alone and happy and jamming and then I started thinking about things. I think of things like When did the word “retard” become acceptable? People say that now. I hear it. We were never allowed to say that word when I was a kid. It used to be a derogatory description of a mentally challenged person. Is there a new definition now? I mean,  if there is I’ll start saying it, but if it still means the same thing that it used to—PASS. (Eminem uses the word “retard” in one of his songs and, admittedly, I kind of sing along, but I always apologize after.)

I haven’t been to town since last summer so I was curious to see if any of the same people were still working at the grocery store and also, if they would remember me. I needed to get a cake so I went to the bakery area first. One of the cake ladies remembered me from a cake I had gotten once before. 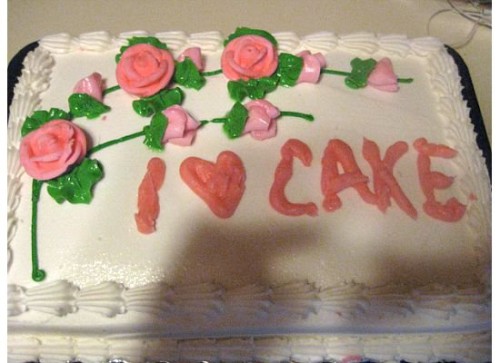 I was heading down one of the aisles in search of delicious Miracle Whip when I heard someone yelling my name. I was excited. Someone else remembered me! I was all “THAT’S RIGHT, MOTHER F**KERS, I’M BACK!!!” But, no. It was a camp friend, one of the Unit Directors. She asked me to take her daughter’s birthday cupcakes for her because the check out lines were long and she needed to get back to camp. She is new this year and does not know me well. Asking me to “watch over” baked goods is like telling a crack head to “Just hang on to my crack for a little bit.” I recently got little doughnuts for the Kitchen Staff at camp, and ate some ON THE WAY to delivering them, but yeah, your kid’s cupcakes are totally safe with me.

So now it’s time for me to check-out at the grocery store. The register guy, the bag girl and I were all “Blah Blah Blah” having a good time, when all of the sudden, the register guy leaned over to tell me that my card was not working. In other words: Declined.

What do you do? It used to be when someone’s card got declined, it usually meant that the cardholder was over his spending limit. When I waited tables in college, every once in a while I would get a really rude customer so I would come back to the table and announce, in front of all of his friends, that his card was DE-clined. THAT’S RIGHT, B**CH.

But these days, a card can get declined for many reasons. And the thing is, it’s not always legitimately “declined.” Sometimes the bank has a hold on it for “suspicious activity.” I can understand that—the bank doesn’t want to get charged for a fraudulent purchase—but it doesn’t show up as “Possible Fraudulent Purchase” on the machine so when you’re told that your card isn’t going through, it’s very embarrassing, and also, it’s a huge pain in the a$$.

They ran my card a few more times but eventually I was told to push my cart out of the line so I could call my VISA company and my register people could take other customers. I felt very small as I stood in the corner with my grocery cart. Plus, I had very little power left in my phone and I knew it would run out of juice if I was on hold too long.

Do I cut my losses, or do I persevere?

I only had a few dollars on me and I wanted everything in my cart (especially the cake) so I decided to persevere. The credit card company lady told me to try the card again, but it didn’t work. That’s, of course, when my phone died so I had to explain to the register people that I would be back. I needed to go to my car to call again because I had a charger there. At this point, FOR SURE everyone at the store was like “Of course Decline Girl has to go back to her car, how CONVENIENT.”

My card, it turns out, had been “compromised.“ Credit card numbers are being hijacked right and left lately. WHOEVER THE TECHIES ARE THAT KEEP STEALING CREDIT CARD NUMBERS: PLEASE CONSIDER USING YOUR POWERS FOR GOOD INSTEAD OF EVIL! LOSERS!!!

I don’t understand why the credit card company couldn’t inform me about my problematic card before I went to use it. One of the people I spoke with said they were in the process of sending me a letter.  A letter? Really? THAT’S a good idea. I see emails in my spam file from your company all the time, but the one time you legitimately need to get in touch, you decide mailing a letter is the way to go. YOU GUYS ARE LOSERS TOO.

After 35 minutes, 2 separate phone calls and 3 different people asking me 5 million security questions, the purchase ban was finally lifted. They were going to send me a new card but let me use the “compromised one” one last time. When I walked back into the store, it was glorious and victorious because the card finally went through.

There were so many people who were happy for me. I WAS BACK!!! The only thing missing was the theme music from “Rocky.” I should have broken out the cake to celebrate, but I didn’t think of that until just now. Maybe next time I go, I’ll get a cake for everyone that was involved, even the doubters—I just hope my card goes through.

Dim Sum & Doughnuts
The Eyedeegafs
6 Things I Learned From a 38 Special Concert
Mommy Mistake Number 2186: The Birthday Party F**K Up