We have a problem.

The amount of hate people have for the gay community is baffling. I have tried for many years to figure it out, but I can’t. And the controversy— so much controversy: Gays in the military. Gay marriage. Gay adoption. There’s so much buzz around these topics, if Prince had wanted to record Controversy II, he would have been set.

Why would anyone care if someone is gay? According to the Merriam-Webster definition, “gay” means happy and excited : cheerful and lively. How is that a problem? And the icon for the LGBT community (Lesbian, Gay, Bisexual and Transgender) is a rainbow! WHO HATES ON A RAINBOW???

When we adopted from China in 2008, gay people weren’t allowed to adopt from there. Truth be told, I didn’t know that when we adopted, I was only interested in whether or not I was going to get approved. I only know now because just recently I wanted to check some dates in our paperwork and I saw that gay people weren’t allowed to adopt a baby in China.

In what world does being gay prevent someone from being a good parent? Or a good soldier? Or anything? I can understand not wanting to hang with someone for lack of common interests, but to flat-out ban or not like someone BECAUSE THEY’RE GAY? No. I don’t get that at all. It’s so idiotic to me that I’m laughing even as I write this.

But the bible condemns homosexuality as a sin! Please. The Bible also condemns eating or touching swine, (Leviticus 11:8) but that doesn’t seem to matter much when you’re sitting around watching Monday Night Football with one hand on the remote and the other down your pants.

Years ago on Woodward Avenue in Detroit, Michigan there was a restaurant called The Backstage Deli. My dad used to take us. It was very cool: art deco style, Broadway posters and a predominantly gay clientele. I loved it. Plus, we were always the only kids, so we got all the attention—and the best waiter. He was so good to us, and that had nothing to do with him being gay or straight, it had to do with him being awesome.

I guess some people just need to hate. Maybe they’re scared of things they don’t understand, maybe they’re jealous, maybe they’re being brought up on a steady diet of bitterness, I don’t know.

Hate is hate. That’s all I know. I don’t care what kind of hate it is, I only care about preventing it—because sometimes, hate leads to irreperable damage. Damage that changes lives forever. And when that happens, we have a problem.

From there, we can either ignore the problem, or we can do something about it:

What can we do?

We can grab our kids and teach them love and appreciation and acceptance.

Kids learn the quickest because their brains are new; they’re not loaded down with a bunch of excess crap like ours. It’s why little kids learn foreign languages faster than adults. Sponge brain, yo.

Teaching kids early to respect others for who they are will only serve them well in the future. If their friend Alex announces he’s better suited as Alexis, they won’t ridicule, they will support. If the prom king announces he’s really the prom queen or a friend decides to come “out” during dinner, they will smile and order cake to celebrate. (Save me some.)

Plus, if someone else says something ignorant and hurtful, they will know not to follow because they’ve been educated, and maybe they’ll even correct the ignorance.

At Dim Sum and Doughnuts, we have zero tolerance for unreasonable hate. 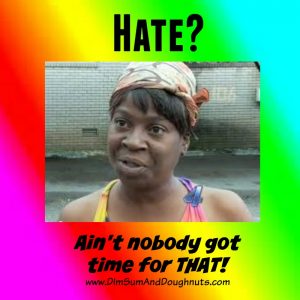 We believe LOVE can be promoted just as hard as hate, but we can’t do it alone.

We hope you share this post to help us support the LGBTQ community, and then please accept this invite to join us on the Dim Sum and Doughnuts Facebook page for a very special DS+D Awareness Campaign video you will love!  (Grab your kids or SUM-one else’s kid for it!)

We can do this!

Stop The LOL Madness!
The Election: 2016
Birthday Bashing
Don't Be A Tease