The most evil stepmother in all the world is the stepmother from Cinderella. She’s the original, and she’s wicked. 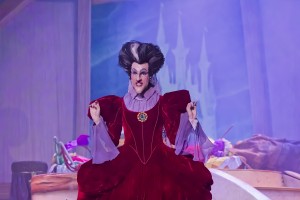 I don’t know why she was so mean. It seemed like she got a pretty good deal:

Cinderella’s mom was dead so she didn’t have to deal with her. She didn’t like the dad, but he was dead too. All she wanted was the house and she got it—and it was probably all paid off! Plus, it’s not like she was saddled with some useless, anchor stepkid. Cinderella was sweet and had a good singing voice and, on top of that, she did the cooking, the cleaning and the mending!

But the stepmother was still angry.

I wonder: If Cinderella’s stepmother was kind instead of mean, would stepmoms still have to work to break the evil myth? Is the negative stereotype surrounding stepmothers something we have grown to accept all because of a Walt Disney character?

When it comes to stepmothers, I’m probably guilty of leading with the negative myself. I know that many stepmothers are caring, warm people, but when a kid tells me that he has a stepmother, my first question is “Is she nice?”

If I were a stepmother, I would have been a mean one. I can see it: The first time the stepkid said “Well, my MOM said I could!” I’d probably go nuts. “Do you see your mom? Cuz I don’t and this is MY house so, yeah. YOU BETTER RECOGNIZE.”

That would be bad. When you’re the Mom, you can do that kind of stuff. Because you’re the MOM. Your word is the end. Period. They can go to daddy all they want, but mommy already said “No” so that’s that.

But when you’re the stepmom, “Because I said so!” is harder to enforce. You could get lucky and land a great stepkid who does what you say (your house, your rules) but you could also get a kid who is kind of a pain—the kind that goes to daddy for everything: “Daddy…SHE said I couldn’t sleep at Soenso’s house tonight! Mommy always lets me! Why’d you have to marry her?” (Blah blah blah and lots of tears.)

The dad is now stuck with two choices (both of which are sucky): He can side with his kid (to keep the peace between them) or he can side with his wife because Hello? You’re a team! (And also, it increases his chances of sexytime later.)

I had a stepmom. I was older though. I was in high school so I didn’t care. I was busy. As long as she didn’t get in the way of my fun (she didn’t) I didn’t care. But when we did disagree on something, my dad always sided with her. It used to make me SO mad but looking back, he was probably right to do so.

It’s not always like that though, especially for younger kids. Younger kids (and older kids too) can have a real rough time with the loss of their original family, and who better to blame than the stepmom?

Sometimes there’s pressure and under-the-breath comments from the actual mom so the kid feels guilty about giving the stepmom a chance. And sometimes the stepmom just sucks. She may have been the right fit for the man, but not his family.

There are some people who believe that parents shouldn’t get remarried until the child turns 18. I know this because sometimes I listen to Dr Laura and she–and much of her audience–are vehemently against it. They believe a stepparent would only be a negative disruption to a child’s life.

I know of at least 4 stepmoms off the top of my head that have brilliantly enhanced their new family unit. The families that have been touched by these stepmoms are BETTER for having them. They have provided a different and necessary kind of love that was lacking before they entered the situation. They have helped raise their stepkids in such a way that they aren’t separated by an invisible step, but held together by love and respect.

Walt Disney would probably say that those kinds of stepmoms don’t make for interesting stories, and maybe they don’t.

But they sure make for happy endings.

Thanks for being here! New site COMING SOON!