The day started out normal enough. I woke up, as usual, before my alarm. Looked to my left. No one there, but I’m used to that. My husband always leaves for Camp Tanuga, where he is one of the directors, late in April so not waking up next to him this time of year–though not my first choice–has become customary. (It’s super easy to make the bed though.)

To my right was my phone, brimming with possibilities to kick off my day. The go-to though is always my text messages. I usually wake up to at least a few texts from various friends. They’re either ending a conversation from the night before or they send me something funny to wake up to.

This is the text I woke up to today: 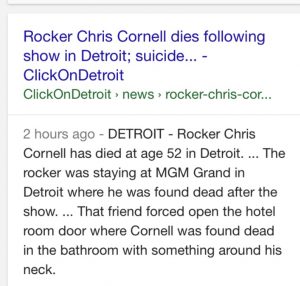 Am I a Chris Cornell fan? Yes. Voice like velvet. Nothing like it. But am I a super fan? No. My friend who sent me the text though? She is. She is a SUPER FAN, and after I got over the initial shock that Chris Cornell (frontman for both Audioslave and Soungarden, with one of the most respected voices in rock—particularly 90’s grunge) was dead at only 52 years old, I felt sad for me and sick for my friend.

There are people who will never understand what it means to love someone you’ve never met, but part of why we love them is because we have never met them.

(He should, but whatever.)

I’m not looking to be an inconvenience to Eminem. And I don’t need to get a vibe from him that I am an inconvenience. That would not end well. I would be all “ARE YOU FREAKING KIDDING ME? You don’t get to treat ME like that!” (And then I would push him a little bit.) “I’ve been through A LOT with you, my friend. And not only that but my kids (the younger one mostly) are completely along for the ride!!” And he would be like “Whatever, lady, you’re crazy!” which would only make me madder.

And then I’m screwed. Because now I’ve got a bad taste in my mouth for someone I respected and admired for many, many years. No thanks. Unless Eminem wants to hang with us because HE wants to, I’m good with the way things are.

Still, if anything ever happens to him, I’ll want some answers. And that’s how my friend is feeling today. She lost her favorite and she doesn’t know why. She’s at a loss, and feeling a loss. And that is perhaps the hardest part of loving someone you don’t know.

We only know what we know, and even with everything we are given: lyrics, prose, news stories or whatever, we will never know everything.

So what do we do?

We go through the stages of grief like any other death. (But because we didn’t actually know the person, it’s usually at a faster pace and there’s no shiva.)

I am not professionally schooled on all the stages of death, but I do know the first stage is usually “WTF???” because we are in a state of shock. From there, we gradually move on to theories and conclusions, and then blame.

But really what we are looking for are reasons.

When it comes to death, we like reasons. We like knowing WHY something happened so A) we have a greater understanding and B) we can avoid it ourselves. Reasons help wrap things up; they give us closure so we can move towards acceptance.

But sometimes we don’t get reasons. We only get questions! And who knows? Maybe we’re not meant to know…? Maybe the “not knowing” is the final lesson or gift from our idol, so we learn to deal with this kind of loss?

UGH. That’s annoying, because what the HELL are we supposed to do with all the feelings we have?

I’ll tell you what we do: We take the day and we mourn. We mourn HARD. We mourn for someone we didn’t actually know, but still, someone we “knew.” We pay homage to a person we connected with on a level that is just too hard to explain, and most people won’t get anyway.

But some do! The ones who love as hard as we do, or if they don’t, they still understand that we do—those are the ones that will get it. They will understand the more you love, the harder it hurts. And they will get you through your “blackest” of days.

Block Out The Noise
"Remember The Heroes"
Mailbag Monday! When You Didn't Mean To Hit REPLY TO ALL, Teenager Mood Swings and The Big Game
When Your Kid Comes Home From Camp