Mean Girls are like bumble bees. They come and they go, but when they come, they’re looking to sting.

I have been stung by Mean Girls, and I have also done the stinging. What’s more, for the last 14 summers of my life, I’ve had the unique experience of living amongst many, many young girls at an overnight camp in Northern Michigan. Most of these girls have been terrific, but it’s only natural to get a few mean ones here and there.

If Mean Girls are brought to our attention at camp, it’s easy to manage them because the close, camp environment allows us to do so. But as we all know, Mean Girls can’t always be contained and if your own little girl comes home, choking back tears because she was the victim of a Mean Girl, it’s going to hurt, both her and you.

You, of course, know she will survive—and be stronger for it—but telling her that won’t matter because as far as she’s concerned, she has NO FRIENDS and the last thing she wants to hear is that tired ass speech.

That speech should be given before a Mean Girl surfaces; that way your girl isn’t surprised if it happens. Conversations need to happen early (and often) so your girl knows how to deal:

For starters, kids need to understand that there are Mean Girls and there are girls who can be mean. There’s a difference.

Mean Girls are rough action, though there’s usually something behind the bravado: insecurities, neglect, bad stuff. These girls are unhappy and their way of coping is to project onto others. They are looking for validation as they build themselves up while breaking others down.

But she let me back in, eventually. She even invited me to sleep over! (I didn’t sleep all night though because I was too busy GAGGING over how gross her sheets smelled, and I couldn’t FOR THE LIFE OF ME figure out how the hell someone so mean (with sheets that smelled like ass) became a part of our group.

But not all mean girls are “Mean Girls.” THAT girl, (up there) she was a Mean Girl. Some girls, though, are just being mean.

Unfortunately, that’s part of being a girl and part of growing up. Well, it shouldn’t be! Well, it is. Secrets, dirty looks. passive aggressive, triangulating behavior—all that mean s**t is pretty normal. Sorry.

It’s also normal for young girls to firmly place themselves in one group. They are looking to belong somewhere. That’s understandable. I’m all for being in a group of friends that is comfortable and safe. Still, it’s also not a horrible idea to spread out a little bit, or as I like to say: Diversify.

Diversification in friendship is basically reaching out and making all kinds of friends, from all different groups. It promotes variety and it insulates the child. She’s covered. She’s covered so she’s empowered. She’s confident because she has options. She has lots of friends, different friends. And if Mean Girls start buzzing around, experience has shown the confident girl isn’t usually the one they come for.

And even if they do, does your girl care?

No. She’s covered. She has other friends to hang with—friends that don’t suck—so until that buzzing subsides, she’s outtie.

And it usually subsides. But if it doesn’t, and the Mean Girls comes after her, your girl needs to make it CLEAR that she’s not interested.

Mean Girls aren’t used to being confronted. They don’t know how to react, so they usually back down.

Moving on and away from Mean Girls is a lot easier if other friends are already in place, especially because there’s a BIG chance the friends surrounding the Mean Girls won’t be joining. And that’s OK. That’s just where they need to be right now. Maybe they will grow out of it and maybe they won’t.

That’s not your kid’s problem, or yours. Your girl has moved on. Diversification in friendship is nothing personal, it’s just good sense.  Better to have 4 quarters than one dollar because if you lose a quarter, you still have $0.75, but if you lose the dollar, you’re screwed.

And that’s so NOT fetch. 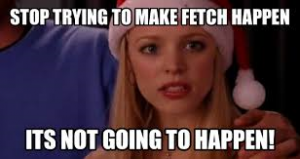