“It’s Her Story To Tell”

Every age presents a new challenge when our kids are growing up. And as much as we try or think we should shelter them, it’s impossible to do. They are truly less neurotic than their parents about moving on and moving up, that transition from elementary to middle school and the biggest step, up to high school. This fall, our only child started 9th grade and she’s finding her place as a freshmen among the 1,300 high school students 3 blocks from home.

Life is simple when they’re younger because as parents, we have more control over their environment. But as we know, kids will be kids. We survived the Jekyll and Hyde friendships and the mean girl comments like, “Those aren’t your real parents.” Amanda learned to navigate recess around the kids on the playground who voluntarily color-coded themselves by group and didn’t practice inclusion. At times, I felt like my kid had no country. Asian kids with Asian parents didn’t always see her as Asian. Jewish kids didn’t always see her as Jewish.

Being an adopted Asian, Jewish American can be complicated. But, Amanda had that take-on-the-world attitude. She was fearless. In 5th grade, they were told to bring in their favorite book. She loved the story about a Chinese baby who found her forever home, while being both escorted and guarded by a ladybug who stayed with her on the entire journey. Amanda’s teacher asked if she wanted to read Shoey and Dot to the class and Amanda didn’t hesitate. She sat in a chair, like an author reading to a group and even fielded questions at the end of the story from classmates who didn’t hold back. One even asked if it was true that baby girls in China were killed. I wasn’t there that day, but my father-in-law had come into school early to pick Amanda up and later told us that she handled herself with confidence and poise.

At the beginning of 8th grade, Amanda had her Bat Mitzvah. She did a beautiful job and the Rabbis were impressed with her voice and her D’vora Torah, where she tells the congregation about her Torah portion (bible story) and what it meant to her. Ironically, that week’s story was about the Israelites moving to their new land and how they were to plant crops and offer portions of their first harvest to the widow and the orphan and make their land a community for all people. Amanda related this story back to her own. She spoke about how she came to a new land with her forever family. Are you detecting a theme here? And again, she was surrounded by family and friends who knew her story as they sat there listening with tears in their eyes. As a funny side note, Amanda told us after her service that a boy she has known for years said he didn’t know she was adopted, even though he saw her dad and I on numerous occasions. Too bad the world cannot see people through his eyes.

As Amanda entered high school, she was fearless once again, but in a different way. She signed up for a pretty challenging class load with many honors classes. As I glanced over her books she brought home, her AP Human Geography textbook caught my eye. Inside, I discovered a chapter that included a lesson on China’s One-Child Policy.

A few weeks into the school year, Amanda told me they started that chapter and her teacher asked if any of the students had been to China. Amanda raised her hand. Her teacher then inquired if she had family there. She answered, “Sort of,” and she left it at that. I laughed out loud thinking she was being a stinker, not explaining further. Then it dawned on me that not only is this class filled with students from 9th-12th grade, but she also didn’t have any close friends who knew her. I realized then that it’s her story to tell and it’s up to her if and when she feels comfortable telling it, no matter where she was in life and with whom.

During those grade school years, our daughter presented these facts as a badge of honor and to educate other students. It made her unique and it also gave her a stronger sense of self and acceptance, even if there was that one boy who greeted her in the morning with, “Ni Hao Kai Lan!”  But as our teenager finds her way, with new classes, teachers and peers, she has decided for now to fly under the radar and blend in. We’re happy that she doesn’t feel obligated to present herself as a footnote in history, a member of this amazing group of 80,000 + girls who arrived in the U.S. legally as citizens, but more accurately as immigrants by no choice of their own. And each child brings with them their unique story to tell which in many cases has included their own special ladybug along the way. 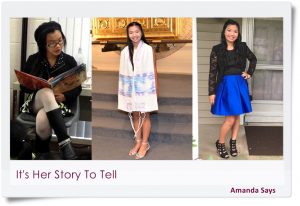 About the author:
Laurie Freeman is a Social Strategist at a Detroit ad agency. She lives in suburban Farmington Hills with husband Rob, daughter Amanda, their 16 year-old Bearded Collie named Molly and 20 year-old cat named Gabby. Amanda,
(Min JiaXue), was adopted from Qinzhou, Guangxi in 2003, one week after her first birthday. From 2004-2006, Laurie helped coordinate monthly meetings for waiting families in metro Detroit through the local FCC group. Laurie’s blog is called Amanda Says and can be reached via email at: laurie.freeman08@gmail.com.

Thank you for being here and for being a part of Dim Sum & Doughnuts!

Being Grateful
Bullying?
The Beginning of Your Life Starts at the End of Your Comfort Zone.
Intrusive In Laws, Awkward Moments and Family Questions