I  have a 7 year old daughter that my husband and I adopted from China in 2008. She was 11 months old when we got her.

A couple of weeks ago that daughter, F, and I had a conversation that went like this:

F: Mommy! They have fruit roll-ups in that vending machine! I LOVE FRUIT ROLL UPS. Can I get one?

Me: OK. That flight isn’t so cheap though and you’re probably going to want to sit First Class. …Do you have any money?

And then the lady sitting next to us told me that she liked the way we discussed F’s adoption so openly. I thought that was very kind of her to say, but I didn’t really know how to respond.

Isn’t everyone who adopts from China open about it? I mean, unless you’re actually from China and you’ve adopted from China, I would think it would be hard to ignore the differences: “No, honey, we look EXACTLY alike!” [Sidenote: When Frankie was younger, I got her a really cute, pink top that said “I LOOK LIKE MY MOM.” I thought it was hilarious.]

Of course, if your child’s features aren’t blatantly different from yours, I guess you could try and hide the fact that your child was adopted, but why would you want to?

Who are you protecting? Your kid or yourself?

I’ve been tossing this topic around in my head quite a bit lately, so I jumped on a website that is special for people who have already adopted, or are currently adopting, from China.

I have always found the China adoption online community to be helpful. I’m not on nearly as much as I was before we got F, but I always go back when I need help with something. Though I have never met anyone from the site in real life, it’s full of intelligent, good people (and some who aren’t)—but the gracious ones are always gracious.

As one might expect, most everyone I heard from on the China adoption site made it clear that they speak freely with their children about being adopted. They not only embrace their child’s past, but they also find ways to weave it in with their present.

I might be lacking a bit when it comes to preserving F’s heritage but we do some things that we wouldn’t normally do if we didn’t have a child from China.

We celebrate the Chinese New Year, and we do it HARD. We get together with one of our favorite families and we party. The girls each wear one of the satin dresses we brought home from China and we all eat dim sum and then sum more.

When we were in China, in 2008, those dresses were around 11.00-15.00 each and they were everywhere. It seemed like everyone was walking around Guangzho with dresses for their new babies. Finding the perfect Chinese dress for my girl became an obsession for me. But wait, why just one? You‘re in China! Get one in every size so your kid has one for every Chinese New Year!! (Because that’s for sure what she’s going to want to wear when she’s 15 years old— a traditional, ornate Chinese dress with teeny tiny impossible buttons.)

It’s hard not to get caught up in it though. The lure is everywhere (at least in Guangzhou it is). The streets are lined with stores that sell items you simply HAVE to have because, well, because you‘re in China: Perfume bottles, photo albums, placemats, jade necklaces, squeaky shoes…It’s like when you’re at Disney and the ride literally dumps you into a store filled with promotional souvenirs and all of the sudden you find yourself standing at the mirror saying “OMG!! HOW HAVE I LIVED WITHOUT THIS “DOPEY” HAT MY WHOLE LIFE?? I MUST HAVE IT!“

It’s the same in China. I don’t care if you just adopted four boys, you’re not walking out of that country without a dress. 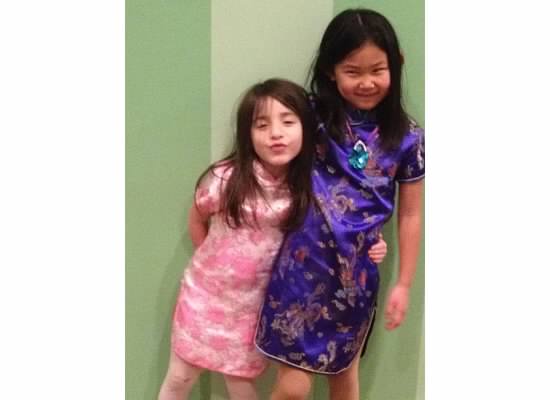 We refer to our China trip a lot. We tell stories about when we were there and we talk about how excited we are to go back. We also talk about F’s story. The story about how she came to us—and when we talk about it, it’s really not a big deal.

It’s just part of the story of how we became a family.

But, that’s not fair because F had a life before us. She was Feng FuLan before she was F and I learned from the people on the China adoption site that it’s not right for me to tell her story.

But sometimes I do. If F is with me, we will just give the bullet points: (I don’t know how to make a bullet point so I’m going to use an *)

*F is from Chongqing, China.

*She lived in an orphanage until we were allowed to come and get her.

Because isn’t it circumstantial? Shouldn’t it depend on the child, and the family? Every child’s beginning story is different. Each story ultimately ends up with a happy ending and each story boasts a family who has the power of choice.

Do we keep it private or do we share?

In our case, if it feels right, I just don‘t see any reason why it can’t be shared.

Should I not be doing that? Does that mean that I am not protecting my child or her story?

I don’t want F to grow up embarrassed or shy about the beginning of her life; I want her to OWN it. I know it’s hard— her past was not easy—but not sharing it and not discussing it aren’t going to make things any easier. Just this morning she was explaining to her sister how she came out of someone else’s belly in China. Her sister, who is 4, was only upset that she too wasn’t adopted. She doesn’t like her backstory as much. She thinks it’s not interesting enough.

Being able to talk about being adopted isn’t easy, especially in a community where pretty much every other kid isn’t, and if they are, it’s not as noticeable. F is “different” around here. And she will always be different.

But what if she learns to own her differences and stand out—not like a sore thumb, but as a star? How great will that be? When you’re different, you don‘t have to compete with anyone EVER. There’s going to be a bunch of pretty girls and smart girls and fun girls, and then there will be F, who is everything and more.

It’s weird for me to spend this much time writing about F being adopted because I don’t think of her that way. Every once in a while she will say something like “I don’t want any cake, Mommy” and I’ll be like “What? No CAKE? Were you adopted?” And then I laugh because I think I’m so funny, and then I eat her cake. 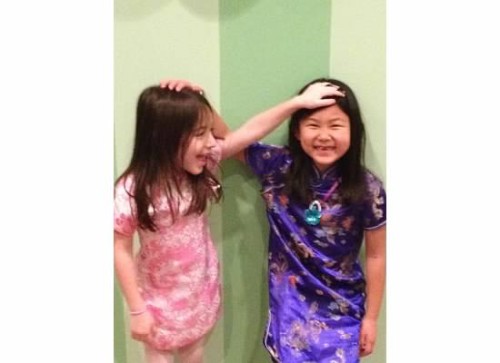 In Defense Of Black Dogs: The Bruno Marshall Story
Why My Kids Are Going To End Up In Therapy
White People Problems (Part 1)
Big Dogs and High Horses