I have heard people say that Lady Gaga is this generation’s Madonna.

Regarding the music, Lady Gaga seems to shine when she’s singing and also when she’s sitting at the piano. Madonna’s vocal range is fairly limited and I don’t think she can play an instrument.

But where fashion is concerned—take a seat, Gaga. Madonna got you beat.

Madonna has always been an icon of style. When she first burst onto the scene in the early 80‘s, her timing was perfect. We were ripe. Madonna brought with her an unfamiliar sound and an effortless look that mixed just the right amount of edge and femininity. 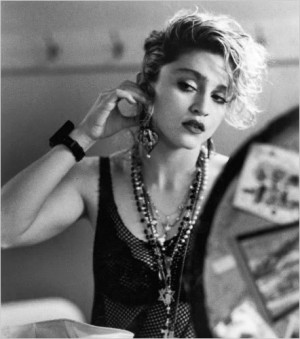 Madge helped shape an entire generation of girls, myself included. I spent many mornings searching for my black pencil skirt so I could throw it on over a pair of  lace leggings. From there I would carefully layer a mesh top over one or two tanks and then I’d accessorize with pearl and beaded necklaces until the back of my neck itched.

Of course, I added one of my many Borderline video hair bows and although I skipped the black bra (because really, who was I kidding) I rarely left my room without lining my arms with approximately one zillion black rubber bracelets— and if I felt that I didn’t have enough on, I supplemented with the black rubber bands from our vacuum cleaner. I was a little bummed that I couldn’t rock the Cross earrings, but the whole “being Jewish” thing kind of got in the way.

Lady Gaga also came on the scene at a time when music needed an adrenaline shot. Her raw talent and vocals were a welcome alternative to the tired, predictable beats that seem to penetrate almost every song currently getting air play.

Her look, however, has me a little confused. It seems that almost every time I see her, I find myself asking the same question: 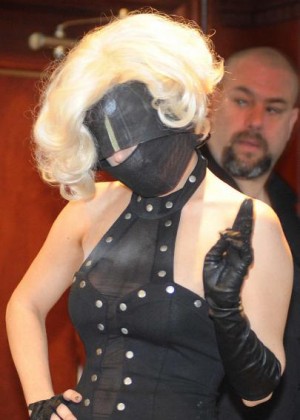 What is that about?

True, Madonna has had moments of controversial fashion choices, but for the most part her style has always remained admirable and accessible. Of course, it is not Lady Gaga’s job, anymore than it was Madonna’s job, to dress in a way that influences her fans and followers. We don’t even know for sure if Lady Gaga  wants to be compared to Madonna—though I have to imagine early on in her career it didn’t hurt, and it maybe even helped.

The thing is, Lady Gaga is now an established artist with her feet planted firmly in the Billboard charts and her music downloaded into iPODS everywhere, which leads me to my next question:

Why is she still trying so hard? …Is she for real?
While the trendsetting Madonna was “Desperately Seeking Susan,“ Lady Gaga just seems desperate. 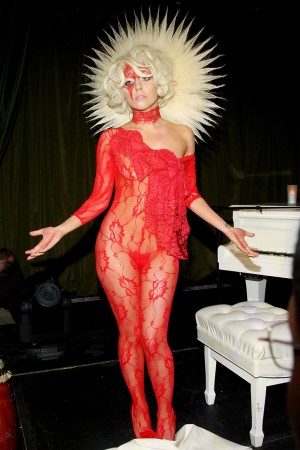 I read somewhere that Gaga claims she was considered a “freak” in high school. That had to hurt. In my experience, I have found that people who aren’t comfortable with who they are generally don’t embrace it with uniqueness, but instead they hide it with some sort of outrageousness—and that is what I think she is doing. I think she is hiding behind her various looks and playing it off as “avant garde.” I think she is intentionally pointing to her ensembles so we don’t see her.

You know what else I think? I think camp would have been a good place for Lady Gaga. If Gaga had gone to overnight camp (probably any camp, but preferably ours) she would have risen to exactly where she is with self awareness outlining her persona instead of ridiculousness.

We have all kinds at camp: Freaks, geeks, clowners, downers, talkers, gawkers, hotties and notties—and many of the kids are at a stage where they aren’t exactly comfortable with who they are. One of the truly special things about camp (and there are many) is that it helps kids find comfort in their own skin.  They find that comfort because the people that surround them make them feel comfortable. Their respective personalities are not only accepted, but in many cases, celebrated. They’re all loved and they all have a place.

Campers live in close quarters and though some of their cabin mates may not be people they would have chosen to be friends with, let alone share space with—TOO BAD—they  learn to live with them and appreciate them for all they have to offer. In turn, kids are accepted without prejudice and most every one of them leave here a little more confident and a little more self assured than they were when they first got off the bus.

Assuming that I’m right about Lady Gaga being uncomfortable in her own skin (and I might not be—but for the sake of this piece, let’s pretend that I am), I honestly believe if she had gone to overnight camp, she would have grown up to love herself for exactly who she is instead of continually shifting our focus to her facade. She would just BE. She would just be herself.

Just Part Of Being A Girl
The Beginning of Your Life Starts at the End of Your Comfort Zone.
One Really Cool Thing About Overnight Camp
How To Deal With Mean Girls