Since my daughter started kindergarten I haven’t exactly gone out of my way to meet the parents of the other kids—not because I’m shy, but because I suck. There are a few moms, however, that I have become friendly with. I met one early in the school year. She came up to me and complimented my purse. She is my favorite.

Not too long ago, she told me something that made me sad. She told me that an older kid was making fun of her daughter (also in kindergarten) because when she bent over, her underwear showed.

I mean, I guess it doesn’t take much when you’re in elementary school but, come on. She’s a little kindergartener! What kind of kid makes fun of a kindergartener?

Of course, when the mom told me, my first instinct was to go to the school and beat the crap out of the mean kid. But then I remembered that I probably shouldn’t do that because I’m almost 42 years old and also, “Underwear Girl” isn’t mine.

I felt so bad for the mom and “Underwear Girl” though. I know in the grand scheme of things, getting made fun of for a little wardrobe malfunction isn’t the end of the world, but for “Underwear Girl” —at that time—it probably felt like it was.

What do you do? What do you tell her? How do you move past the incident and learn how to deal with mean kids all at the same time? It was all too much and I walked away from the conversation only too happy that I didn’t have to deal with that crap just yet.

But then I did.

A week or so later MY kindergartener, Sweet Pea, told me that some second grader told her that she has “elf ears.”

Yep. Some kid told my kid that she has elf ears.

I will kill that kid. I will pull HIS ears off and I will shove them in his back pockets so he can hear better when I’m KICKING HIS ASS.

The thing is…her ears do kind of stick out. We think it’s from when she lived in the orphanage and she was in a crib all day. The babies were only taken out of their cribs for an hour a day and the way she slept…in the crib—it messed up her ears. No biggie. We’ll take care of it if she decides she isn’t into the look later in life. But whatever, that stupid second grader does not get to make fun of Sweet Pea. NO WAY.

But what can I do? I can’t go down to the school and “Tom Petty” him like the mom in This is 40. (Or can I? I don’t think I can). All I can do is explore the situation with her so she is a little more prepared next time.

In fact, as parents, that’s pretty much all we can do about any situation. We can expose, explore and prepare to the best of our abilities.

We need to get realistic about our world.

Well, guess what, mommy? Drinking and driving? That was so 1987. You know what we got? We have drinking, driving and TEXTING.

My girls and I were at the police station recently. I had to bring cookies so some of the officers because I sort of owed them. I filed a police report because I thought someone stole my wedding rings and the two officers assigned to the case spent a lot of time on the case, and with me, and then they had a really good lead…and then I found them, in a drawer, in my bathroom. OOPSIE!) Anyway, we were walking out of the Cop Shop and there was a poster on the wall of a really bad car crash with a Dummy all busted up. The girls were all over me about the poster: “Mommy, what happened to THAT guy???”…”Do you know him?”… “Is he dead?…Dead like Puppa Lewie???”…and I told them that is what happens when people text and drive at the same time.

I don’t care that neither one can text or drive right now. They’re still in car seats! But that poster was so gruesome, it’s going to take the jaws of life to remove it from their memories.

That’s my motto. No topic off limits. Get it ALL out there.

I’m certainly no expert (I laugh even as I write that) but I feel like there’s no such thing as too much prep work. So that’s what we did. We prepared. (Because even if it’s not “Elf Ears,” it will be something and there will be a next time).

Me: What did you do when that kid said you had elf ears?

Sweet Pea: I didn’t do anything.

Me: Honey, if you don’t do anything, the mean kids will know you’re a target.

Lovey: You should have told him that you were taking a time-out from him!

Me: You should have just said “You know what? You’re a LOSER and by the way, did I tell you that you’re a LOSER?”

Sweet Pea: What if I just tell him that he is a bully?

And that silenced all of us because, well, that’s a good one.

And then we sent her back out in the world, because we have to. 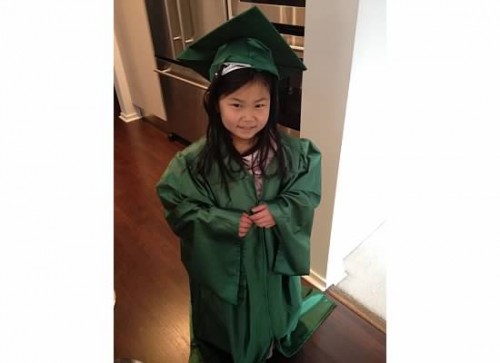