This past September, both of my girls started at new schools. “Sweet Pea” started kindergarten and “Lovey” started pre-school. These are big steps in their little lives. Who would have thought that out of the three of us, I would be the one having the hardest time?

I’m actually OK with Lovey going to pre-school. You would think that I would have trouble with her being gone every day because she is my baby and she is delicious—but oddly enough, I’m fine. It could be because it’s the same school that Sweet Pea went to and I’m totally dialed-in to their program or it could be because it’s a Jewish pre-school and with all the Jewish holidays in September and October, I don’t think my kid has been there for a full week since school started. (I can’t believe how many Jewish holidays there are. I have never even heard of some of them. I think some of them are made up.) Either way, I’m totally fine with pre-school.

It’s kindergarten that is kicking my ass.

Sweet Pea is taking the bus for the first time in her life and she is at a new school with new teachers, new times and new rules…LOTS of rules.

What do you mean I can’t come by every Monday and pull her out of class a little early so she can get to her hip hop class?

She’s in kindergarten now, you can’t do that.

Exactly. It’s kindergarten! Look…we all know that she’s probably the smartest one in the class—not because of anything we have done that’s so great, but because she is ASIAN. The other kids can’t compete with that. It’s not their fault. It’s just the way it is. Plus, it’s KIN-DER-GAR-TEN. What are they really doing in there? Is it THAT big of a deal if I pick her up early on Mondays?

On top of that, here are some of the other things that are new to our lives since Sweet Pea started kindergarten:

1. Bus Pick Up: The bus comes every morning at exactly 8:32. “Mr. Al” is the bus driver. We have never been late for the bus. I am awesome at being on time for the bus. We leave every morning at 8:27 and we walk with Floyd Coden to the bus stop. It only took Sweet Pea 3 days to find a boyfriend with whom she sits every day, and it only took me 12 school days before I stopped tearing up as I watched her little wave grow smaller and smaller as the bus drove away.

2. Bus Drop Off: The bus drops Sweet Pea off every day at 4.30. I have been pretty good about pick-up. I was a minute late the other day and “Mr. Al” had a dirty look all saved up for me. I often wonder what would happen if one day the bus came and no one was there to pick up Sweet Pea. I guess she’d be screwed.

3. Send an empty/reusable water bottle every day. I’m assuming it should also be clean so that makes this one kind of a pain, but I still do it.

4. Send a nutritious snack every day. Also kind of a pain because by the time I’m done packing lunch, I’m sort of out of ideas for snacks.

5. Mondays are “Show and Tell.” I have only forgotten “Show and Tell” once. It was the time of the “Quacking Duck.” I sent it back the next day thinking the teacher would squeeze in Sweet Pea to show it, but she didn’t. She sent it home telling Sweet Pea that Monday was her day. I got schooled on that one.  But that is the only time I forgot. I’ll take the hit. The second time though—Not my fault.

Sweet Pea was supposed to bring two items to school. The first item was a “Show and Tell” item. Sweet Pea had a very cute collage all made up showing a bunch of toys she wanted from Toys “R” Us that I was never going to buy her. Perfect item to “Show” everything you want and “Tell” how you’re never going to get it.

The second item was supposed to be a universally known logo for an environmental piece they were doing in class. Easy breezy. Sweet Pea took a Henri Bendel shopping bag to use for her logo of choice.

Ms. S and I emailed back and forth several times about both the missing “Show and Tell” item and the universally known logo item. Sweet Pea had one story for me and Ms. S had a conflicting story. During this Kindergarten Conundrum of 2012, I came to the following conclusions:

B) The Henri Bendel logo is not universally known, but it should be.

C) I probably shouldn’t have gone back and forth with Ms. S as much as did. I couldn’t help it though. I was concerned about Sweet Pea lying to me, I was curious about the location of her “Toys R Us” project and—at the same time—I didn’t like Ms. S thinking that I sent my kid to school unprepared. I didn’t want her to think that I was a slacker mom (at least not this early in the school year).

My friend “Ashby” told me that if the teacher really thought Sweet Pea not doing “Show and Tell” was truly a problem, she would have gotten in touch with me. Oh, Ashby! So reasonable. I have backed off Ms. S as much as possible since this incident and I’m trying my best not to get in the way of her doing her job.

I wonder if she misses me?

6. Library Day. Every week the students get to go to the school media center for Library Day. They get to pick out one book and then we’re supposed to send it back on the next Library Day. I am proud to say that I have never ever screwed this one up. I have, however, had some issues with Number 7.

7. Find the library book somewhere in your house before Library Day.

8. “Bagel Day.” Fridays are bagel day and if you want, you can send your kid to school with .75 so he or she can buy a bagel. This is pretty self explanatory, but of course, I have questions: If I send Sweet Pea with money to get a bagel, does that count as her “nutritious snack?” Is it a GOOD bagel like Detroit or New York Bagel or is it some crappy imposter bagel like Einstein or Brueggers? I think these are legitimate questions as I’d like to know where my .75 is going.

10. If you’re going to pick up your kid from school instead of having her ride the bus, you have to call or email the office and the teacher. That makes total sense. The thing is…there was this one day when I was totally planning on picking Sweet Pea up but it was a day or so before Yom Kippor (big holiday for the Jews) and I was having “Break The Fast” at my house. (Jews do “Break The Fast” after fasting all day. Fasting is how we repent for our sins, but I don’t fast because I think I’m a pretty good person)…Anyway, I got crazy busy setting up for all of our company and I thought to myself: What the hell, Sweet Pea can take the bus.

The thing is, I sort of forgot to inform the school that I was no longer picking Sweet Pea up and that she should instead take the bus… so there she was, sitting all alone in the office, waiting for me.

How many years of therapy am I looking at?

11. School ends at 3:50. On days that you pick up your kid instead of having her ride the bus, there are 3 kindergarten lines by the south set of doors at the school. The first time I went to pick Sweet Pea up, it didn’t go well.

Little Lovey and I got there at 3:45. On our way to the doors, one of the other kindergarten moms, who already had her kid with her, stopped to chat for a minute. (Looking back, I now know that if she had her kid, mine was probably ready too.) I thought I had a few minutes to spare, but when Lovey and I got the doors, they were locked and there were no kindergarteners or teachers in sight. I was a little annoyed because I wasn’t late, but whatever. Lovey and I walked to the main set of doors hoping to find her there. Nope. We then walked into the school, and some lady who worked there, let’s call her “School Lady,” told me to go to back to the Kindergarten doors to find Sweet Pea, so that’s where we went.

I was now starting to panic a little bit. I have no idea why. Of course, she was safe but for some reason, everything started spinning and I was starting to feel like the mom in EVERY Lifetime Movie. Where Is My Daughter!?!? Lovey and I then made our way back to the office and ran into School Lady again. School Lady said: “She wasn’t there?” Yes, School Lady, she was there. I just decided to leave her so I could check out your school. Nice digs. Bravo.

The lady in the office, “Office Lady”  who knew me as the “mom-who-was-late-a-few-days- ago” told me to go back to the original doors but by this point I was all: “NO. Where is my daughter? I am done with your doors.” As Lovey and I walked out of the office, Office Lady got on the phone with Ms. S and the next thing I knew, Sweet Pea was walking over to me with her teacher.

I guess Ms. S took her back to the classroom because she thought I would look for her there…and I don’t know, she was saying some something but I wasn’t really listening because guess what I was doing? I WAS CRYING. Crying. Total breakdown right in the middle of the hall of my daughter’s school. Blubbering like an idiot. So now I’m not only high maintenance and unorganized, I’m also flat-out crazy. Ms. S felt so bad and School Lady was all “We would NEVER let anything happen to a child…” and there I was, sniffling and wiping my tears while both of my kids are looking at each other like “What the hell is going on with mommy?”

I don’t know why I’m having such a hard time adjusting to Sweet Pea’s new school. Maybe I just miss her old school, a school where everyone knows us and we know everyone. A school that doesn’t require me to skim a checklist every morning before we leave. A school that is lined with a warm embrace and maternal hugs. I don’t know. All I know is that things change and kids grow. This is life and I need to step up or get run over. I’m getting better and better though, and every day I screw up a little less.

Now, if only I could find out where that missing “Show and Tell” item is. 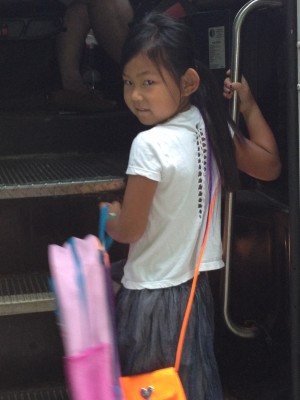 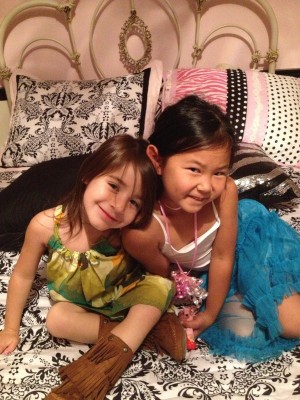 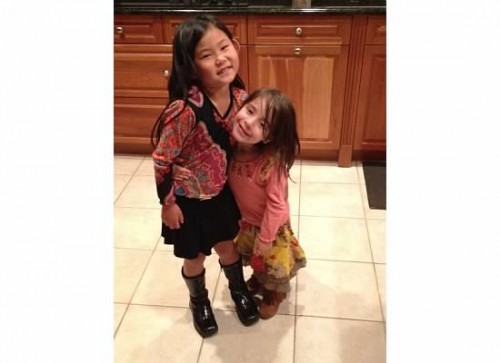 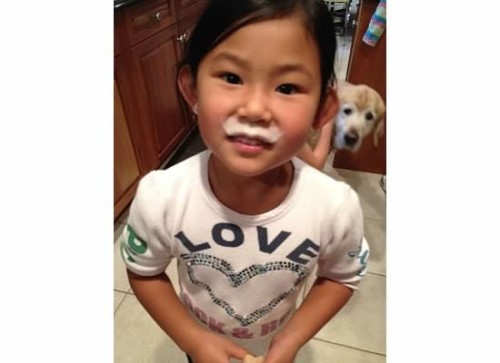