Are your kids sick of playing School? Are they done fighting over who gets to be the dog when they play House? Are you scared for them to play Doctor? Sounds like it’s time to step up the game options so, in the spirit of Pretend Play, my 5 and 7 year old daughters and I have come up with 4 new games for your kids to play:

Cruise Ship :
Put on some Jimmy Buffet, give them some luggage and it’s anchors away! Let them know ahead of time that they are to use FAKE clothes with their real luggage though. My kids didn’t and instead they tore up their closets packing up a bunch of real clothes—and while they might be very adept at taking things OFF the hangers, they still haven’t quite mastered putting them back ON. 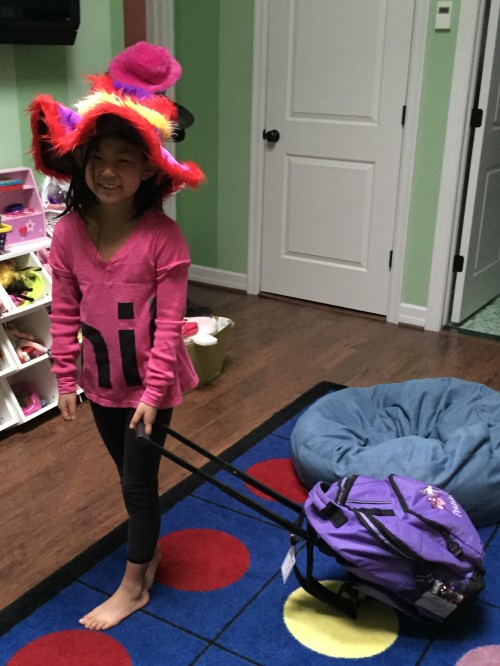 Salon:
I don’t know why EVERY kid isn’t playing this one…?? How fun is it to do make-up and hair? All you need for this one is a chair, some make-up and 2 fingers.

Make-Up Area: You for sure have a bunch of old make-up and make-up bags that you‘re not using, right? (You don‘t have an old make-up bag that someone gave you? I think you do.) Stuff the make-up bag with old make-up and samples. Stick to the basics: Lipsticks and Eye Shadow. You could also throw in some blush and blush brushes, if you have them. Once I got some sample blush with a magazine so I gave it to my kids. It was an Australian magazine. Australian magazines give presents with their magazine purchases: blush, umbrellas, scarves… Stuff like that. American magazines don’t. Get it together, America!!

Hair Cutting Area: Another chair and 2 fingers is enough. I don’t recommend handing out actual scissors, at least to my kids I wouldn’t.

If you’re all “My kid is a boy, he’s not going to want to play Salon.“ Don’t say that!! He can still play! He can be the sweeper, or the shampoo’er—he can even be the client and get in the chair! He’d rather be on the other side of the chair? No problem! Switch!

You’re not convinced of Salon’s greatness yet? Just remember that most salons are breeding grounds for gossip and blah-blah action. My kids are young so they talk about stupid stuff; stuff from TV shows they watch. They love to talk about TV shows no one else is interested in. Whenever they try to tell me stuff that happens on shows like Jessie or Ever After High, I try my best to listen but eventually I’m like “Yeah…I really don’t care.” Take it to the Salon!!

Restaurant:
I’m thinking this one is getting some play, but it should get more. I mean…it’s a no- brainer! You got your customers, a waiter or waitress and a cook. The only other things you need for Restaurant are an apron (and that’s not even really necessary, just better) a little pad, a pen and of course, fake food. If you have little kids, you probably already have fake food in your house. If you don’t, that’s messed up. FAIL! Even I have fake food. You can get it anywhere and it’s not expensive at all. Just get an off brand, who cares?

We have a bell in our kitchen and sometimes I let my kids use it. It‘s perfect for when they yell “Order up!“ My kids have been playing Restaurant for awhile. It’s not unusual for one of our friends to have real food and their “Restaurant food” all at the same time. Their food usually comes up pretty quick and it looks a lot better than mine, but they get the orders wrong a lot. They read it back like they’ve got it, but they don’t. Honestly, I can’t believe they’re still in business. Must be the cake… 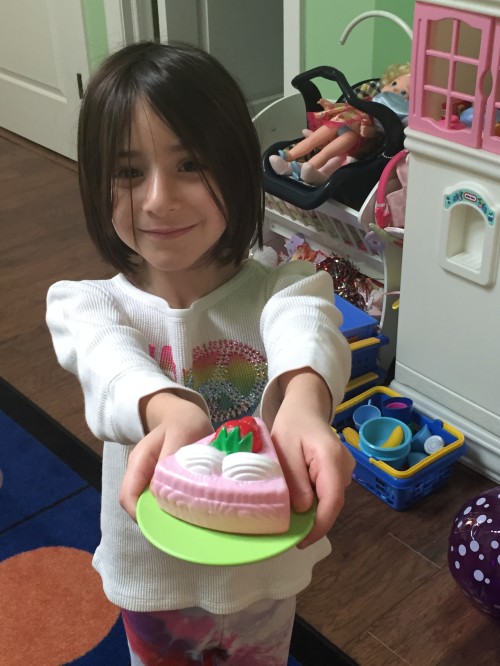 Shopping:
I can not be the first person to think of this one, right?? This is a good game for just two kids because you have the store owner and the shopper. But, if there’s more kids around, even better! Black Friday!

The necessities for this game are minimal: Give them some shopping bags and maybe an expired credit card or fake money. They can use their own crap as the items “For Sale” and it’s on! Store OPEN! A cash register is not key for this game, but it would only make it more awesome. I wish we had one.

Those are the games we’ve come up with. What about you? Airplane?? Orchestra?

You're Not Alone (II)
Do You Believe In G-D?
What To Do When You're Just Totally Losing It At The End Of The School Year
Do You Care If Others Judge You?