I won’t ever be able to write a song that disses my mom for popping vikes or bashes my dad for being absent because my parents weren’t like that. They showed up when it came to parenting– it didn’t matter what they were going through at the time, they showed up. And they were good parents.

My parents instilled self confidence without encouraging arrogance. They promoted self- worth without compromising reality. They raised me to focus on what I had to offer, even on the days when I felt I didn’t have much. They knew I felt the need to overcompensate for my shortcomings, but they worked with me so I would grow out of that.

There is nothing worse than some guy who thinks he is The Man, but he isn’t and he wears his shirt tucked ALL THE WAY into his jeans without pulling it out a just little bit, or some girl in her 30’s who feels the need to tell anyone who will listen that her Aunt Rita is friends with the mom of a kid who goes to school with one of Eminem’s daughers.

My parents didn’t want me to be like that.

I just needed to do what I could do and do it to the best of my ability, and that would be enough. They knew what I was capable of and those were the boundaries they abided by. When I complained incessantly that I couldn’t deal with the spit that got caught in the mouth piece of the clarinet, my mom eventually let me quit. She knew I was much better suited for dance and tennis and let me do what I loved. Tiger Mom she was not, but she fostered my development and pushed my potential just enough so that I would, one day, emerge to be exactly who I am.

And I’m good with who I am.

I want to do the same with my girls. I want to find that balance. But what if the talent they are looking to be praised for doesn‘t exist? When do the lines of being supportive and being honest cross?

My 4 year old daughter, Sweet Pea, made me a picture the other day and after she gave it to me she said “Mommy, I made this for you. Isn’t it beautiful? It’s Snow White, Snow White and Lovey (her little sister). What do you think?” 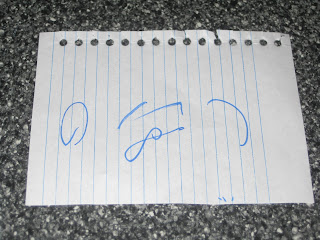 Sweet Pea is so great at so many things and I’m not worried about her future for one minute. (Unless, of course, she decides to become an artist. If that is the case, in front of the word “Artist” it might say “Starving.”) Of course I don’t have to worry about this now. She’s four. But it’s inevitable that as my girls get older, things will come up that require me to momentarily park them on their path to becoming the functional and productive adults they’re meant to be.

Sweet Pea will likely get defensive when I tell her that the Jets probably won’t be interested in her for several reasons (the main one being that she’s not a guy) and I’m pretty certain that Lovey will be sad when I tell her it might be a good idea to look into something else since supermodels are very tall and her Jew genes probably won’t get her too far. Things like that will come up, and when they do I will show up. It‘s my job to be real about their capabilities, and when it’s necessary, I will be. I’m not a tiger mom, but I am a mom.

That day is not today though. That day is another day. Today my daughter isn’t setting goals or making life choices. Today she is just giving a beautiful picture to her mommy.