There are 3 people in this world that hate me. (Probably more, but 3 that I am aware of.) I don’t hate them though. I don’t think I could ever truly HATE someone in my life. There are people I can’t stand, and there are people that I strongly dislike, but there’s no one that I for real hate.

There are things that I hate though. Like avocado. I hate avocado. I know avocado is so good for me, but I don’t care. I hate it. The texture, the grittiness, the color. All of it. HATE. And if I say that I hate it (like I just did) I know I will be taken seriously because hate is a word universally known for its power and vehemence. It means business.

For many years I didn’t utter the word hate because I was scared of it. We were never allowed to say it when I was a kid. My dad made it VERY clear that we weren’t to hate anyone or anything. In his eyes, hate was a very strong word with an equally strong sentiment so my brother and I were to use it sparingly—and only if it was REALLY warranted. (And my dad was usually the one to decide if it was warranted.)

But now I’m in my 40’s and I can do whatever I want! For my 44 years, I feel that I have (so far) led a very full and fun life. I’m where I’m supposed to be. But interestingly enough, for as happy as I am, I find that I have been using the word hate more and more.

I like it though. It doesn’t scare me the way it used to and there is something very liberating about using it. Plus, I’m very conscious about when I use it. I don’t hurl it at people and I only use it with adults. I don’t use it around kids. If I’m around kids, I don’t even use it when I’m describing avocado because I don’t want them to think it’s OK to toss Hate word around, because for them it’s not.

Kids aren’t ready for “Hate” yet. There’s just too much power in the word. They can’t handle that kind of power. It’d be like putting a 16 year old in the driver’s seat of a Maserati. They’re just not ready.

Their brains are still too young to know when it’s OK to use the word hate so I think it’s best if they don’t.

My girls are no strangers to the list of swear words, they know them all, but if you ask them: “Who’s allowed to swear?” their answer will be “Eminem. And sometimes Mommy.”

I wouldn’t have gotten away with that crap when I was a kid and they shouldn’t either. They haven’t been on this earth long enough know what they hate. And besides, it makes me uncomfortable when they say it.

So as of today, I am hereby placing Hate on the “Does Not Fly” List. 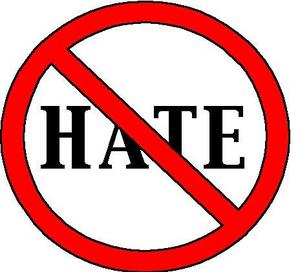 Swear words sound weird coming from a child and hate is even worse than a regular swear word because there is no swear word (not even the F word) that is more hurtful than hate. (I guess B*#ch is pretty rough, but if someone calls you a “B*#ch,” you probably already know that about yourself so it’s not THAT big of a surprise—but if you hear that someone HATES you, that’s a sideswipe that will leave a mark. Hate hurts.

Since my kids don’t know what the hell they’re talking about half the time and they aren’t ready for the power of Hate, (Cinderella, really? Cinderella??) the word will be treated as a swear word in our house. It will no longer be used, nor will it be tolerated—not by anyone who lives or visits our house.

Unless it has to do with avocado.

Honest To G-D (The Dim Sum and Doughnuts Oath)
The Thing About Play Dates...
Big Dogs and High Horses
You're Not Alone (VIII)