This is Part 2 of White People Problems. I’m not trying to tell you what to do, but you might want to read Part 1 first.

Before I move on, I feel like I should give a little background. In the last post, I jumped right into our house being under construction but I never said why…

When Cody (my husband) and I were looking for houses before we got married, over 10 years ago, it wasn’t so easy for us to pick one. We are very different. My husband is “Camp Guy.” He’s very low maintenance: 30-year-old t-shirts and ripped jeans that didn’t come that way when he bought them.

I am the opposite.

Suffice it to say, it wasn’t so easy finding a house that fit all of our needs and our very different personalities. When we eventually did find “our” house, it was exactly like how we met: We weren’t paying attention.

The outside of our house isn’t anything so great. It’s just a very humble, unassuming ranch—but when we walked into the house, he went one way, I went another way, we met in the kitchen and said “This is the house.”

What Cody saw: The perfect 4 bedroom house for raising a family, beautiful neighborhood, great piece of land, houses are far enough apart so our neighbors won’t bother us. The house needed virtually no work, just some paint and furniture.

What I saw: The perfect 4 bedroom house for raising a family, beautiful neighborhood, great piece of land, houses are far enough apart so our neighbors won’t bother us. The house needed A LOT of work, but had amazing potential.

That was nice of them.

It was the perfect kitchen to hold me over and shut me up, but it was their kitchen. Unfortunately, after all the other work we did on the house, we were broke, busted and disgusted so my dream kitchen was going to have to wait.

I never really brought up re-doing the kitchen until we were already in the house for about 5 or 6 years. Cody seemed really open to it when he responded by telling me that I was “f**king insane” and I could certainly have any kitchen I wanted with my new husband, in my new house.

I told him that I would be back before the 10 year mark.

Why 10 years? Because everyone remodels their kitchen after 10 years. I mean that’s just standard operating procedure, is it not? Times change, gotta keep up! The 70’s were all guacamole green, dark orange and mustard yellow, the 80’s were white formica with or without the wood trim and the 90’s were, well, I don’t really know because I was in college and those years are kind of a blur, but you get what I’m saying.

Cody seemed a little skeptical about my 10 year philosophy, but thankfully one night we were with my girlfriend, “Lucky” for dinner, and Lucky agreed with me. That wasn’t enough for Cody though so Lucky and I walked around the restaurant and questioned a bunch of random people until we found enough that corroborated what I already knew to be true, so that was that.

And here we are, 10 years from when we moved into the house and we just re-did our kitchen! YAY! It was a HUGE pain in the a$$, but’s it’s the kitchen I always wanted. It’s fun and it’s happy and it’s perfect for our family.

And everything was good until this winter.

This winter of 2014 was ridiculous. In my entire life, I have never seen anything like it, and we live in Michigan! It was Snow Central and school was cancelled so many times that every day that went by, I got crazier and my kids got dumber.

But at least I had my kitchen! My fun and happy kitchen!

And then, it happened. The snow that had endlessly been piling up started to melt and our roof just couldn’t contain all the water. Water was ice damming and looking for places to go. I would have been happy to direct all that water TO HELL, but it chose, instead, to come through the bedroom of my 6 year old daughter, the closet by our front door, one of our bathrooms and, you guessed it: ALL OVER OUR BRAND NEW FREAKIN’ KITCHEN.

For 10 years, I would wake up every single day and pray that a big tree or a plane would crash into my kitchen (and for world peace) but NOTHING. The minute we remodel though—Mother Nature decides to pay us a little visit.

And now our kitchen, along with several other parts of the house, is under construction. AGAIN.

That wallpaper, I know.

That was NOT me. That was the people before me. Frankie, my 6-year-old LOVED the wallpaper when she saw it. She wanted to keep it.

The construction guys, CG#1, CG#2 and CG3#—they for sure think I’m crazy. They haven’t said anything but I know they’re a little curious about the overwhelming (yet tasteful) presence of Eminem in our home. They also might be questioning the mug that says “I LOVE ROBYN” with Eminem’s face. They also probably think his posters behind every closet door is a little weird, 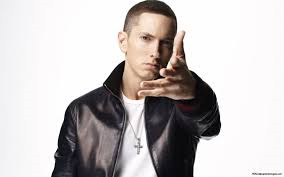 and they might wonder if it’s appropriate for my 4-year-old to be walking around the house while his music is on, but I don’t care. 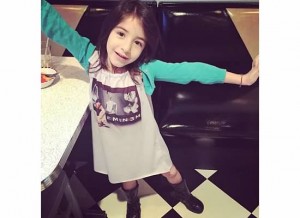 Truth: She is totally oblivious to Eminem because A) she has been listening to him her entire little life and at this point, she thinks he is part of our family and B) both of my kids know that NO ONE is allowed to swear except Eminem (and every mommy in the world, and sometimes daddies, but not as much as mommies).

But for sure the Three CG’s are like WTF is with this lady?

And I keep offering them food but they always say “No,” but I wish they wouldn’t because it would make me more comfortable if we were all eating and I really need a snack right now. Actually, I just need chocolate. So I head to the storage room right by the kitchen and they are for sure are wondering what the hell is going on in there with all the crinkly wrappers since we have a WHOLE candy section available in our kitchen! Why would I continually walk OUT of the kitchen and into that storage room…? WHAT’S IN THAT STORAGE ROOM? More chocolate? She’s got a STASH!! That storage room is a FRONT for her stash!!

And it is because sometimes you just want to stuff your face full of chocolate in private. Especially when you’re stressed. Even when the stress is about something stupid like having to remodel your kitchen again, and just wanting it to be over.

I know that’s what they’re thinking, but they won’t say anything. They feel bad for me and my white people problems.

"My Writing Process" Blog Roll Tour
Bus Stop Talk
Ode To Sippy II
Are You Feeling Pressure To Have Kids?