When you’re a parent, you can tell your kid to do pretty much anything you want and they have to do it. I’m not making any recommendations, or judgments— I’m just stating a fact: There is great power in being a parent.

I say “Yes” once in awhile too, but they’re not used to it so it’s funny to watch them look around trying to figure out if it’s a trick or not.

The things we represent in our family, they’re all good. At least we think they are. Many will argue with our allegiances, but we are ready. Part of being a loyal supporter is playing defense. And defend we do, no matter what. 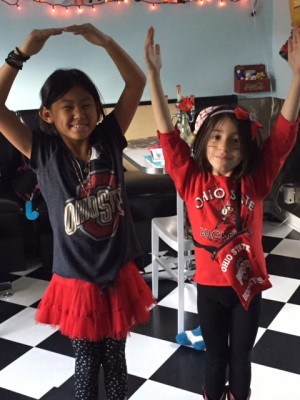 Not all of the things I push are controversial though, some are no brainers:

We adopted our older daughter, F, at 11 months old, and she’s been repping adoption with us ever since. She’s not walking around in a shirt that says MY MOM AND DAD ADOPTED ME AND ALL I GOT WAS THIS LOUSY T-SHIRT, but she represents. We all do.

In fact, if you were to go up to either one of my daughters looking to discuss adoption, they would gladly engage. (You might even be sorry you asked!) But they have a lot to say because we have nothing to hide. We couldn’t even if we wanted to. I mean, unless people choose to assume that I had a wild night of sexy time with a Chinese guy, it’s pretty obvious that at least one of my two kids is adopted. 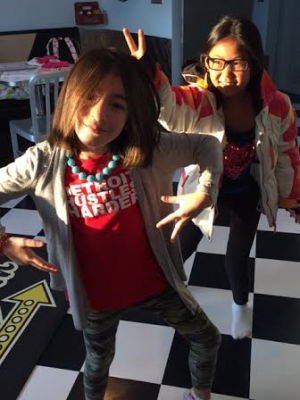 But one is not. And because she’s not, she sometimes feels a little slighted. Her back story isn’t quite as intriguing as her sister’s and try as she may, she can’t figure out a way to spin it. Her go-to is to tell everyone that she had to be “CUT out of Mommy’s stomach and it was an EMERGENCY!”— but sadly, no one (besides me)really cares.

So, over the years I have given her other things to rep:

But now my kids are getting older and they want to make their own decisions. Apparently, they don’t need me in their face telling them what I think they should support. I do it anyway, but now they have final say. I’m allowed to offer up a suggestion, but it can only be a suggestion.

Like Autism Awareness. I recently offered that up as a cause we should boost and they looked at me like “WTF is Autism?”

To be fair, Autism isn’t an easy thing to explain. I tripped over my words quite a bit, but by the end of our conversation they understood that awareness and knowledge of Autism is important. Not just for them, but for all of us, because we are all growing up amongst the wonders of Autism.

So, we decided to do a post on the Dim Sum and Doughnuts Facebook page asking others to tell us what THEY want us to know about Autism. 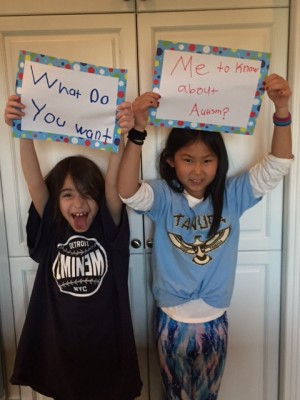 The people that have Autism need to be recognized for how special and awesome they are, and so do their parents. I don’t know their road, but I imagine it’s not an easy one. Parenting is hard enough, but parenting a child with special needs requires extra special parenting. The parents of children with Autism are doing the best they can, and a little support only helps, especially on the rough days.

There will be claims that I’m exploiting my kids because I make them step up, but I don’t care. I’m doing what feels right to me, as a parent.

Still, I’m not an idiot. I know there could be a day when one or both of my kids  end up on a therapist’s couch, blah blah blah’ing, when all of the sudden, they yell (hands to the sky): You’re right! It IS my mom!! She did this to us! She said “NO” all the time and “YES” only to mess with us, and also: SHE MADE US REPRESENT!!!!

But that’s OK. I’m fine being the one to bear the brunt of all their neurosis. I can take it. I just hope that they know I meant well—and that one of them is wearing an Eminem shirt.

How about you? Your kids? What sports team, worthy cause or artist do you represent?