On Monday I went nuts on my kids.

When I turned around to see BOTH of them on their stomachs, hanging over the seats, a$$es in the air and shoes on the ceiling of my MONTH OLD CAR, I went nuts.

I have told my 8 year old on several different occasions that, as a rule, dirty shoes do NOT belong on the seats of my car. I didn’t think to mention the CEILING. And of course, if my 6 year old sees her doing it, she’ll think it’s a great idea and follow suit.

They have trashed so much, these girls of mine. They’re like walking, talking wrecking balls. Little boys, I’m sure, are worse, but with little boys the wreckage seems to be quick and painful. With girls (at least my girls) it’s more of slow death. Little things here and there—marks, stains, dents that all of the sudden add up to TRASHVILLE.

For example, the couch: Trashed. It used to be an awesome couch. Ask anyone. But now it’s a used-up, faded, stained wreck. 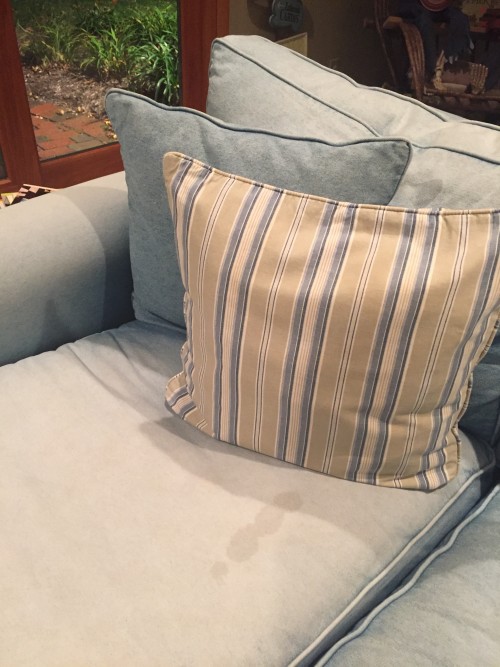 The fact that it’s faded is not entirely their fault, (it’s the skylight and time) but I’m blaming them anyway. The stains? That’s them. The stains started popping up when they were little and they have multiplied. And no, I can’t turn the cushions over anymore. That ship has sailed. Thanks, girls!!

And what did they do to celebrate the death of my couch? They moved on. They moved on to my car! Well, that’s not cool. I’m in the car a lot (because of them) and I would like it to stay nice. They trashed the old one so bad that towards the end, I felt the need to apologize to every person who ever got in or near it.

All summer long, whenever my friend “Mona” would get in the car I’d say, “I think I found the source of the smell! Is it better??” And every time he’d say “No” and open all the windows all the way. The guys at my car dealership razzed me so much about the smell that when we moved home from camp, I dragged the girls to the dealership to explain that the smell was their fault, not mine.

And now they think they’re going to do it again? To a new car? I don’t think so.

So I went nuts.

If someone was walking by, they for sure videotaped me and put it on You Tube, but I don’t care. They don’t know! They don’t know the hell of “The Smell” and I’m not living through that again.

Obviously, I know that my kids putting their dirty, nasty shoes on the ceiling of my car isn’t the worst thing in the world. There are worse things, many things, but I’m over them trashing my stuff. Besides, it seemed like a good time to remind them that I still run the show, I make the rules, and if I’m going to go THAT nuts over shoes on the ceiling, imagine what will happen if I ever bust them with Jagermombs in the bedroom? Plus, after my psycho moment, I got some much needed silence from the back seat and some very rare ass-kissing: “I’m sorry, Mommy.” “We love you, Mommy.” “We won’t do it again, Mommy.”

So I pushed out a few tears and sniffles to make my disappointment even more legit and I guilted: “How would you feel if I took something you loved and destroyed it? How would you feel if I walked into your room, took Green Baby and cut his ear off?” And then I stopped because even I got a little scared. (When did I get so Mafia?!?) But I made my point, so I was done anyway.

I like rules—at least the ones I make up. Rules usually have a reputation for being very confining, but they don’t have to be. Rules can actually be very comforting. They set boundaries and teach discipline—and let’s face it, if kids were left to their own devices, it would be total anarchy.

I have no idea what my kids are like for other people. I hope that they don’t do stupid stuff like shoes on the ceiling, but who knows? I only know what’s going on in my house and when kids come over they have to abide by our house rules. 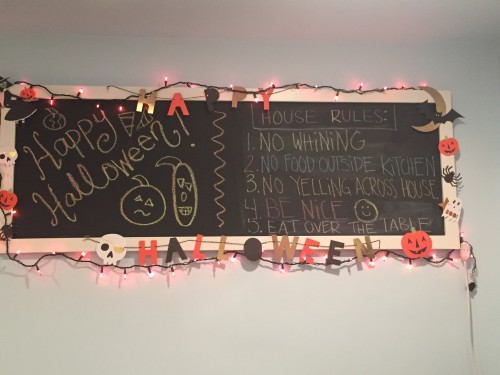 For the most part, the kids don’t care—the rules aren’t going to stop them from having a good time, they just keep things more harmonious.

The last rule on the list used to read: NO BARE FEET IN THE KITCHEN but my girlfriend, Busy, made me change it because she said it was a ridiculous rule, even for me. I disagree because to me there is nothing grosser than a kitchen floor. I don’t care how clean it is, it’s still gross. Food, feet, shoes, dirt, dog hair, drool, (I’m almost throwing up right now). But she’s right that not everyone is as grossed out by a kitchen floor as I am, so I changed it.

It was an easy change because as kids grow, there’s always going to be a new rule to put up and a boundary to be pushed. It will be like that until they move out. And then I will have to take down my set of rules, let them go, and pray they don’t break the law. 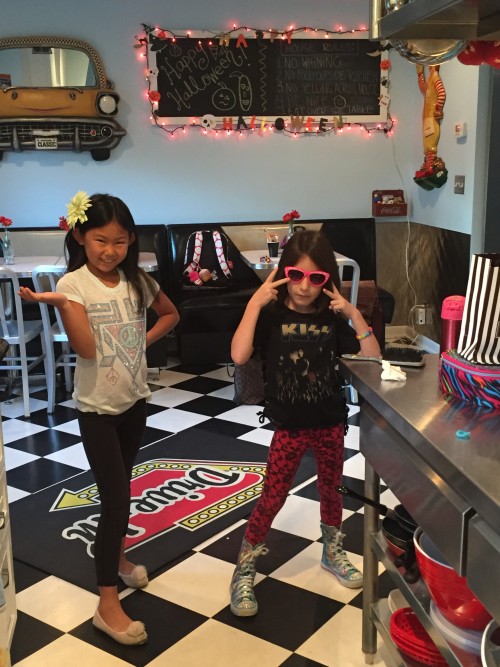