I once got a fortune that said “Eat to live, don’t live to eat.“

I made someone trade with me.

I love to eat. I’m usually planning my next meal while I’m in the middle of eating one. I don’t know if I was always like this, but I am now. My friend, Busy, thinks we are like this because we are losers who have nothing else in our lives.

My kids don’t feel the same way I do about food. They’re much more apathetic at mealtime. For awhile, my 20 month old, Lovey, ate just about everything we put in front of her. Those were good days. Those days are over. She now seems to be easing off the food. I think her belly and her palate have reached their respective breaking points. We had a good run, but she’s moving on. She’s now eating only bits and pieces of some food and rejecting others. The rejects end up on the floor and for this reason our dog, Floyd Coden, loves Lovey more than anyone else in the family.

My other daughter is almost 4 years old. She’s very busy. Way too busy to eat. She’s two bites in and “I’m done!“ I don’t get that. WHO LEAVES MAC ‘N CHEESE ON THEIR PLATE? The veggies, sure, but Mac ‘n Cheese? That is just wrong. She will be sorry one day. She doesn’t appreciate M&C for all its heaven on earth status now, but she will, and when she does, the calories will count. I can‘t wait for the day when she says: “I’m dying for some Mac and Cheese, but I really shouldn‘t because then I‘ll have to work out for 10 hours.” My eyes will then proceed to roll somewhere into the depths of the back of my head. You had your chance, sister.

I was recently commiserating with some friends over how often we have to make a different meal for every person in our family to ensure that everyone is happy. We do this because we are scared of what will happen if our kids don’t eat and also because we are dummies.

My girlfriend, Segal, said she read something about how if we serve everyone at the table the same thing for several days in a row, eventually everyone will start eating it. Wait. What? Feed everyone the same thing? Put the food out and that is that? The kids just have to deal? I was dubious, yet intrigued. She admitted that she has never tried it, but supposedly it works. If it works, I’ll do it. Sign me up. I did sleeping training with both of my kids, I can do anything!

I was very excited about the prospect of no longer being the short order cook in my house, but when I pressed her for more info, she simply said: “They say it works.”

Who are “They?” Do I know any of them? What if they don’t know what the hell they’re talking about? Sure, it sounds great in theory to serve only one meal and tell everyone to “just deal,” but I will feel kind of bad if my kids pull a Gandhi and end up convulsing in the corner weak with starvation. I wonder where they will be then?

Oh, They. How I loathe you. You had me so excited, why can’t you deliver any concrete evidence as to whether this works or not? Gotta go with the gut, I guess. As parents, that’s all we have. The idea of serving everyone the same thing makes sense, we are a family after all, but unless the outcome of an idea has actually been proven, we’re taking a chance and guinea pigging our kids. On the other hand, what real harm can come from giving everyone in the family one option for dinner and if not everyone is happy, TOO BAD? They’ll either cave and everyone will eat, or they’ll stand on principle and have to skip a meal or two.

I might actually give it a shot (right after I learn how to cook) because really, what’s the worst that can happen?

Isn’t that what they say? 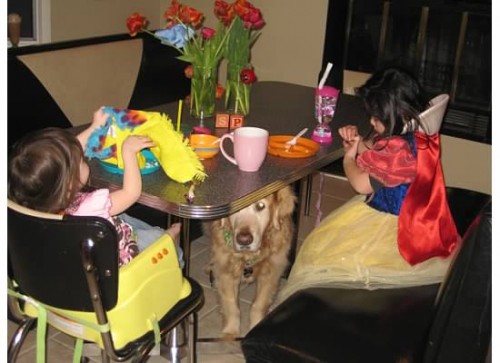